Last weekend we were invited to a birthday party of  twins who were turning 4 years old. Esther has loved her marshmallow gun and she thought they would make a great gift. Instead of making them, I asked Gabriel if I could give them a couple of the ones he had left over from making Christmas presents. Here’s how the conversation went….

Me: “Gabriel, can we use two of your extra marshmallow guns to give to the twins.”

Gabriel’s a great business man. I think he just recouped all the money he spent on the Christmas gifts for his cousins.

I’ve had several comments and emails about exactly Gabriel made the marshmallow blow guns for his cousins. So, here’s the tutorial, after the fact.

However, if you don’t want to make one, I know a teenage boy who will sell them for $5 each plus shipping. 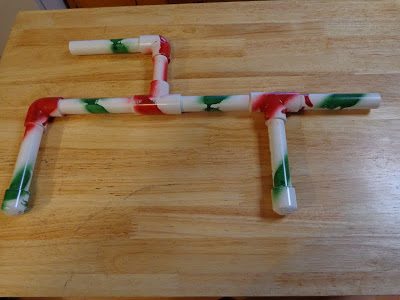 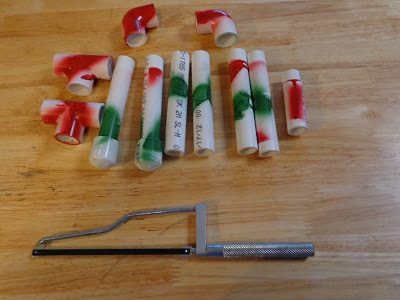 Using the T’s, elbows and end caps assemble so that it looks like the first photo.

Spray paint or use duct tape to decorate.

Buy some marshmallows and enjoy the fun!

This post is shared at Made by You Mondays, Make a Scene Monday, What’s in the Gunny Sack, The Dedicated House,  twelveOeight,  Elizabeth & Co,  The Rustic Pig,  Fun in the Functional,  What I Learned Wednesday,

Thanks! You should totally make some, they're so much fun.

Thanks for sharing your great ideas! We would love to have you come to our very 1st link party. It is live The Busy Bee'stoday! Please come and link up as many of your ideas as you would like! You can find us herethebusybhive.blogspot.comThanks! Joye & Myrna

Thanks for the invite.

My son came home with one of these that he made in Cub Scout summer camp. I'll give you a warning. Don't let kids shoot marshmallows at a two-story high ceiling. Yup, we still have one stuck on our ceiling that we can't reach with anything. It's been there for two years. The boys have tried shooting it down with Nerf guns to no avail. They are fun though!

Lol...good thing we don't have ceilings like that. Actually, we've banned them from inside the house. I hate finding old marshmallows in every nook and cranny.

My boys are going to love this! I’m your newest follower. I would love for you to share this at my Fluster’s Creative Muster Party @ http://www.flusterbuster.com/2013/01/flusters-creative-muster-party-4.html

Thanks for the invite.

Oh how fun is this!! Thank you for stopping by and visiting my little blog and I am totally pinning this so I can make one!

Thanks for stopping by!