Gabriel has a self imposed goal to be the youngest Eagle Scout in our family. Which means he needs to complete his requirements before he’s 15 years and 8 months. I think he’ll do it  (although he’s banking on Benjamin not breaking his record).

So Saturday he started the physical work on his project. His project is at the same historic house where Christian’s and Josiah’s projects are. He’s adding on to the rain water recapturing system. The house sits in a public park with hiking trails. The “beautification” committee of the city has planted quite a few fruit trees around the house and they will use this to help water them. It’s kind of cool that the city would plant fruit trees instead of non fruit trees. 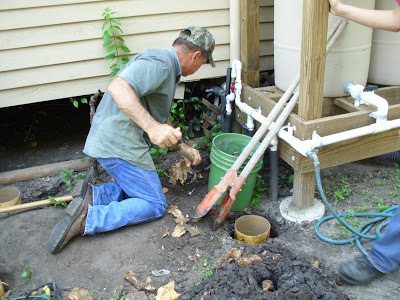 No project is without obstacles. First there was a crepe myrtle tree that had to be removed. So Carl took Gabriel and our other boys to pull it out before the work on the project started. On their first scheduled work day (back in May) they found conduit running right where they wanted the frame to be. So they called off the work day, called the electrician and then waited.
When they started digging on Saturday, they found a stump that was exactly where one of the 4X4’s needed to be (they don’t have much wiggle room since the electrician decided that Gabriel could just shorten the width of the frame instead of moving the conduit). Most of the morning was spent hacking and sawing the stump. 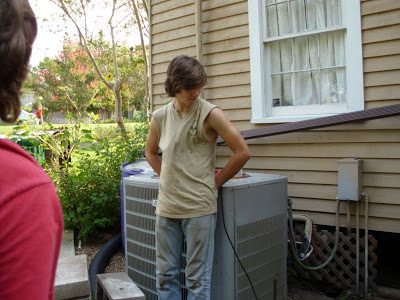 Supervisory crew? Just kidding, you can see by Josiah’s grubby clothes that they are all taking turn working on the stump.

The frame is coming together. tip: when you slide pieces in, it works best to slide each end evenly instead of putting on end in place and trying to hammer the other end in place. just in case you wanted to know. 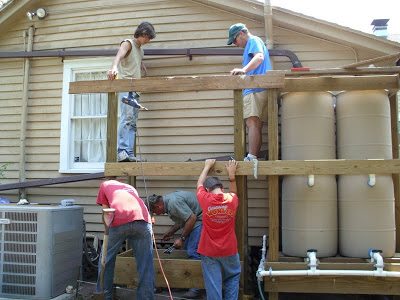 The house and park will have a total of 440 gallons of water storage available to them. Now, we just need rain. 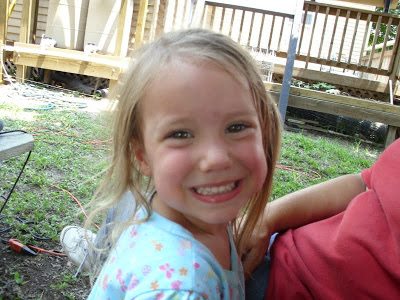 The girl’s and I came and brought lunch for the hard working guys. We stayed and played for a while.

Next weekend they will do all the plumbing work and the project should be done. Gabriel still needs a couple of  Merit Badges but I think he’ll finish these before the end of the year. He’s pretty motivated.

Goodness, that's a lot of hard work! My sister's boys are in the scouts; actually the whole family is. Both my sister and her husband are leaders. The scouts are a very big part of their life.

It is hard work but so good for the boys. Scouts has been such a great thing for my guys to do. We girls just cheer them on... and provide food.

Very cool! We have rain barrels hooked up to the gutters, but it's not clean water. We will use it for the garden.

No need to be jealous...(though I know it's just a saying) We don't have a Sam's Club very close, so one day we threw as much in the van as we could. It was quite full. We have had so much rain, the two barrels we have are full and overflow when it rains.

I know, I'm so jealous that you already have your rain barrels up. We have them on the list, but they are pretty far down.