There’s a tricky balance I’m trying to walk these days. A balance between  having children and having adult (and almost adult) children. The balance comes into play a lot these days when my wants, such as having a bedroom for my boys that doesn’t look like a garage, clashes with their wants, such as not caring that their room looks like a garage.

I’m learning that to walk this balance requires a softer touch and quieter voice than I would think it would. It requires that I request help at a time that feels right for all three of us, not just me. It also requires that I not “take over” and insist that this project be done my way (even though I have painted no less than 6 houses so I know a little something about the process). 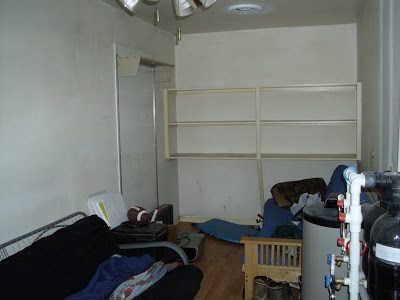 This is the before. The room was originally the mudroom which is why it looks like the garage. Now, before I get the “Worst Mom of the Year Award” let me just say that when we looked at this house this room was my biggest concern. However, Christian and Josiah assured us that they were fine in this room, in fact they kind of liked not having a room near the other children. The room is bigger than it looks (8’X12′) even with the water softener in it. Let me also say that they really didn’t care if we painted it or not – it took weeks of persuading to get this room painted. 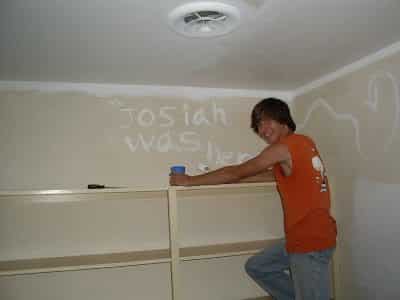 Josiah wound up helping the most since Christian has a full time job and he didn’t want any of the younger children helping (at this point). It was nice doing a project with him and spending some one on one time with him. That kind of time get more scarce the older he gets. 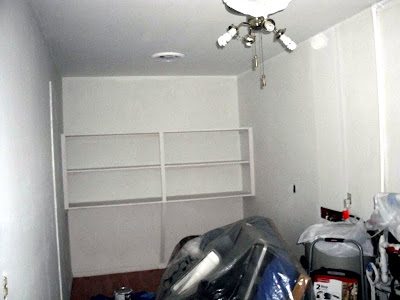 This is the room after it has all been primed. It looks so much cleaner and brighter. 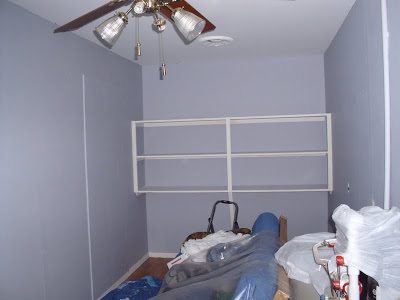 The finished room, well, the painting at least. The colors are from Olympic and grey is called Hi Ho Silver and the white is Snow Storm. I really like them. We painted the ceiling with KILZ ceiling paint. This was the first time I’d used Olympic paint and I really liked it. 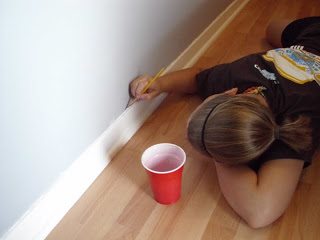 Phoebe was kind enough to take an artist paint brush and touch up all of the silver where the white got on it.
My part is done in here, I’m hoping the boys will hang some of their pictures on the walls but I’m determined to respect that this is their space, not mine. I’m just happy that it doesn’t look like the garage anymore.

I like the color choices...or is gray a color? Anyway, it is very manly. Looks fun.

Yeah, I don't think gray is technically a color. It has some blue in it so it doesn't look like sheetrock putty like some grays do.

Looking good. Are the boys excited in any way?

Thanks, Patty. They are very happy now. I think the reluctance had something to do with moving 3 times in 4 years. And they have both worked a lot this summer and are really enjoying their time off. But I knew that their room would be so much more of a sactuary if it didn't look like a garage.