Our May garden is just delightful! Granted I was traveling for the first two weeks of May so it’s been a really short month for me. We’ve also had much more rain and cooler temperatures than we normally have in May so working in the garden has been a delight. While I was gone, my family did a wonderful job of harvesting and keeping the garden watered when it didn’t rain. 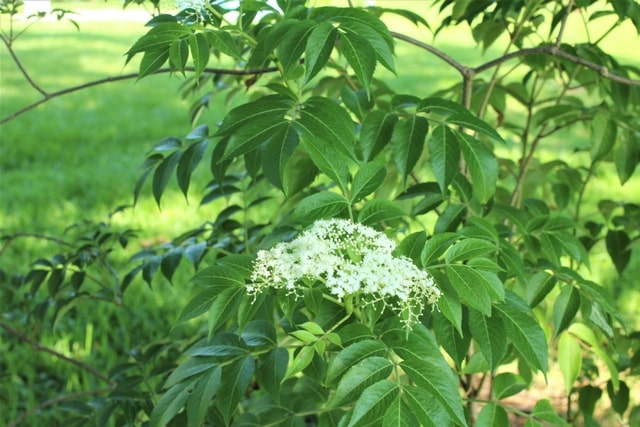 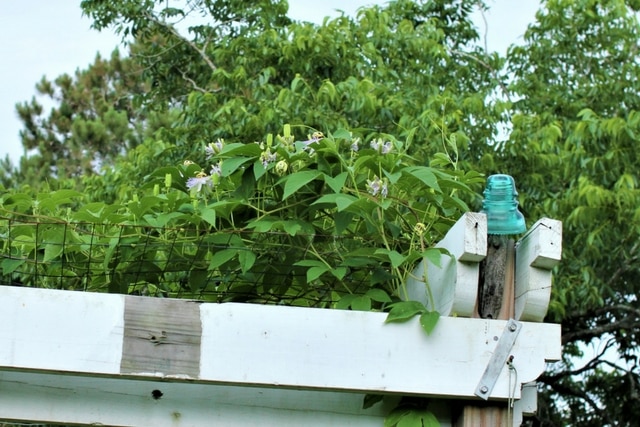 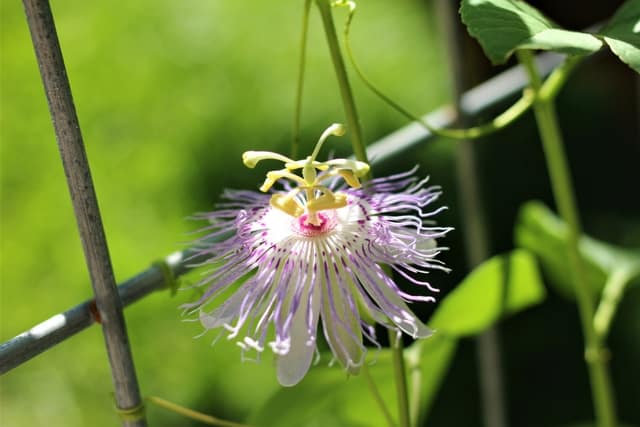 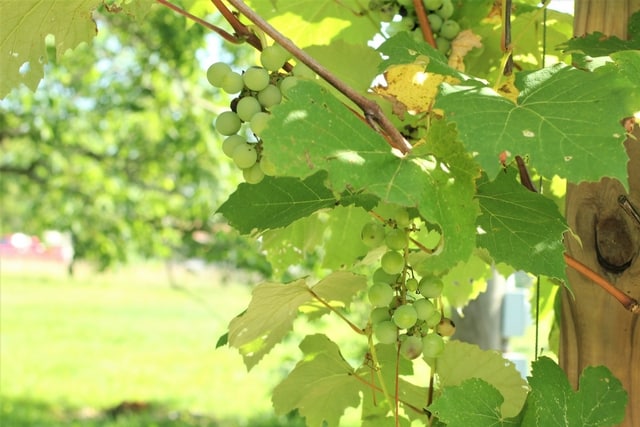 My dreams of some day having a proper orchard may not ever materialize but many of our non-traditional fruits are doing really great. The elderberry tree we planted last year is flowering and has also sent out quite a lot of new shoots. Apparently elderberry can propagate from the roots by sending out new shoots. I didn’t realize that when we planted it. But now I have five or six new trees.

We’ve tried for years to grow a passion vine and have never had success, until now. Last summer our son brought home a small vine that he had dug up from the pastures of the ranch he was working at. We planted it on one corner of our grape arbor and it grew and produced fruit. This spring it came back – even after our  hard freeze in January – and we had new plants popping up all over the yard. We transplanted those new plants to an arbor to shade our A/C unit. I can’t wait to see it all fill in.

One grape vine is doing well and has grapes on it. The other two are struggling. The grape vine that has grapes is the same one that produced grapes last year that were not very sweet, although they are table grapes. If you peeled the skin off they were good but that was a pain. I might just pull them and plant passion flowers next year if they don’t produce good grapes this year. As much as I want to grow grapes, we might just not have the right soil or climate for table grapes. 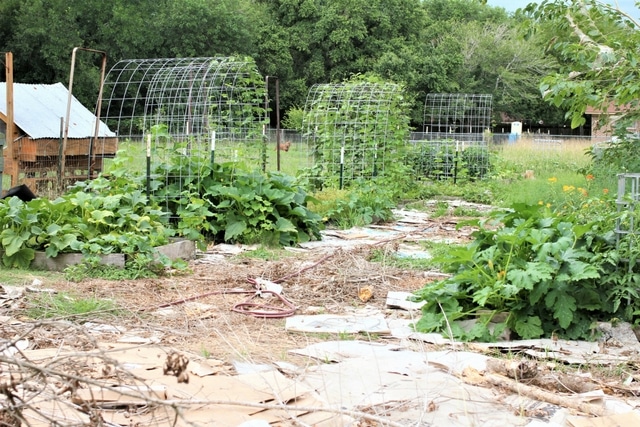 This is the long view of our garden. I include it every month because I want to show the beautiful and the real. Yes, we’re still working on laying cardboard and topping it with wood chips as weed control. Our chipper broke a few months ago and so we’re at a stand still for a while on this project. And yes, that water hose is how I water all twenty-four 4X8 beds. 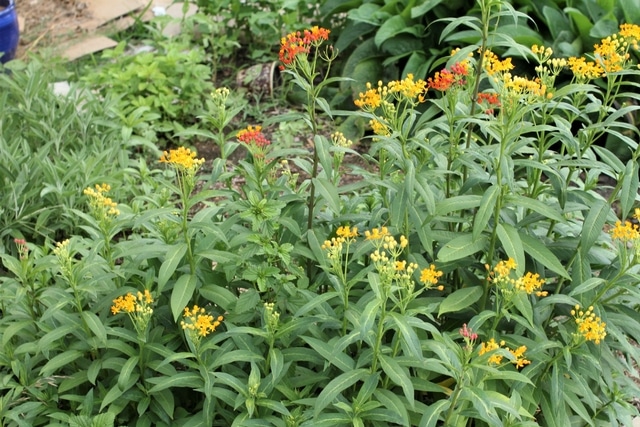 The herb garden is pretty fantastic. We had some herbs that survived our hard freeze and some that reseeded and popped up in the spring. I feel like it doesn’t need as much attention as it has in the past since the herbs are more established. Last year I planted milkweed for the first time. When it went to seed I collected the seeds but apparently not all of them. We have hundreds of milkweed plants popping up all over the garden and yard. Fortunately, I love how beautiful milkweed is so I’m counting my blessings and relocating many of them to the bee yard and other places around our property. We have a lot of space and it would be great to fill in some of our fence line with the beauty of milkweed. We don’t eat or use milkweed medicinally, it’s planted solely for the pollinators, especially the monarchs. 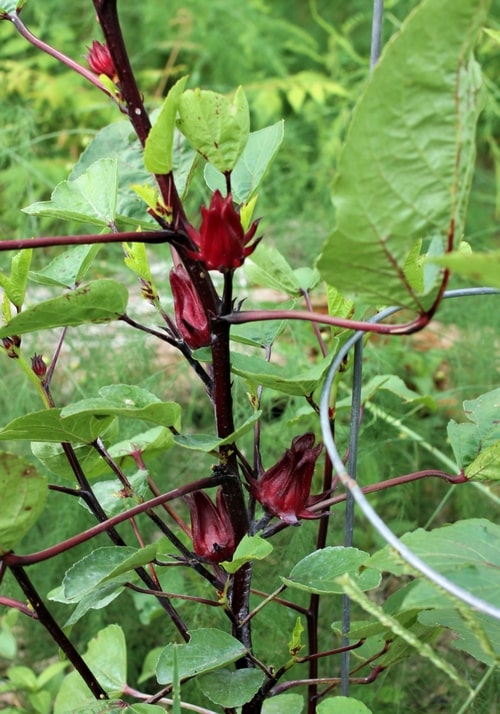 This year we added edible hibiscus to our herb garden. These are so beautiful but the blooms don’t last long. After the bloom dies it leaves behind a calyx (a pod) that has a seed pod inside. The beautiful red part in the photo above is the calyx and it’s what is used in hibiscus tea. I’m sure there are some medicinal uses for it, but we’re just enjoy it as food right now. 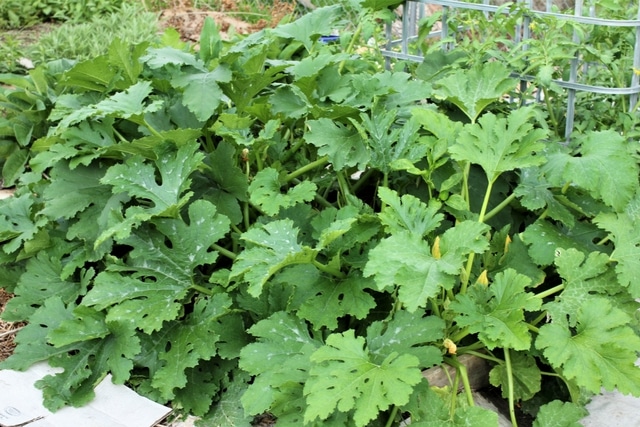 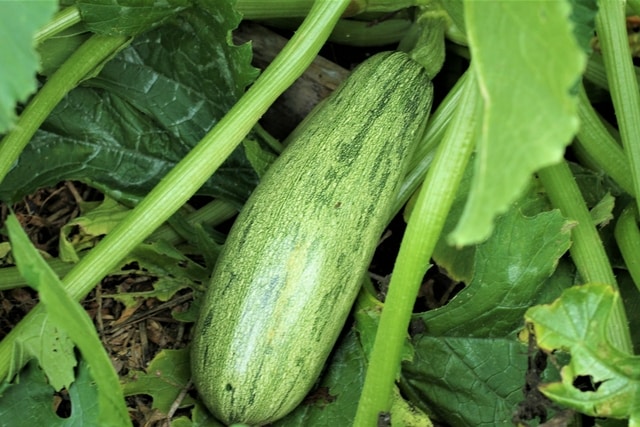 We planted three different varieties of summer squash and this one, caserta, is a new one for us. It’s a zucchini and won the All-American Selection in 1949. Only two of the six seeds germinated so we only have two plants. Their leave are actually shaped more like melon leaves than squash leaves which is interesting. They don’t seem to be having the trouble with vine borers or powdery mildew that the other summer squash is having. They taste great so we’ll probably be growing them again. 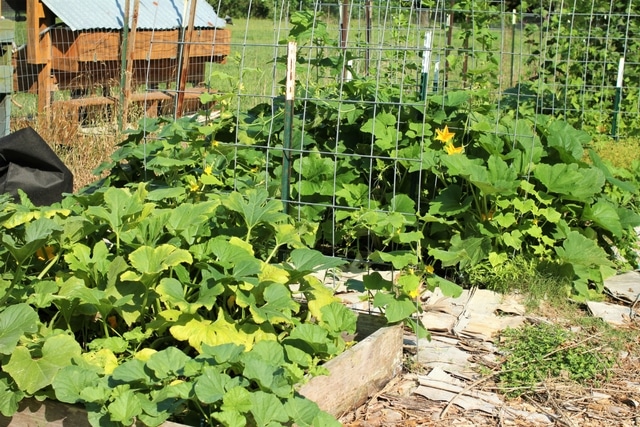 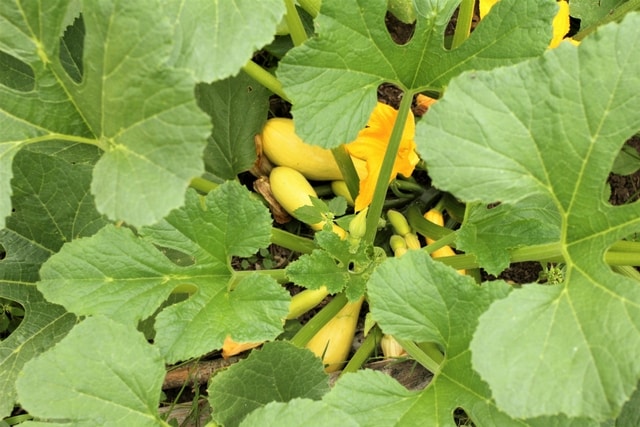 Our other summer squash is doing well but it’s already been hit by vine borers and it’s beginning to get powdery mildew. We deal with both of those things every summer so it’s no surprise. Our harvest has already been so good that we have all the frozen shredded squash and dehydrated squash that we need for the year. We’ve also enjoyed lasagna with zucchini noodles instead of pasta several times. I’ll be sharing the recipe in a few weeks. I want to make it one more time to make sure I have it down. 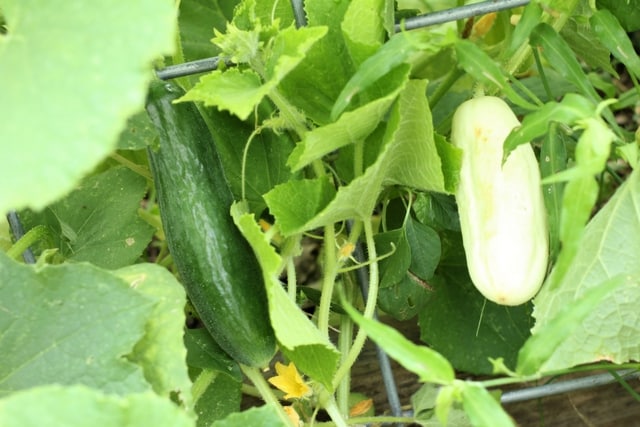 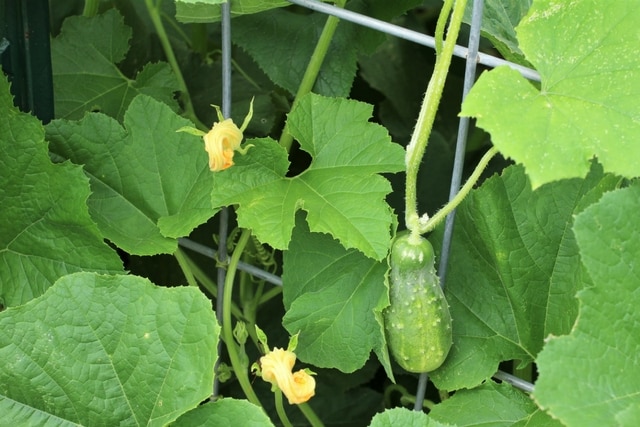 We planted three different varieties of cucumbers; a salad cucumber, a white cucumber and a pickling cucumber. We only have one or two plants of each variety so we shouldn’t have an overwhelming excess like we did last summer. 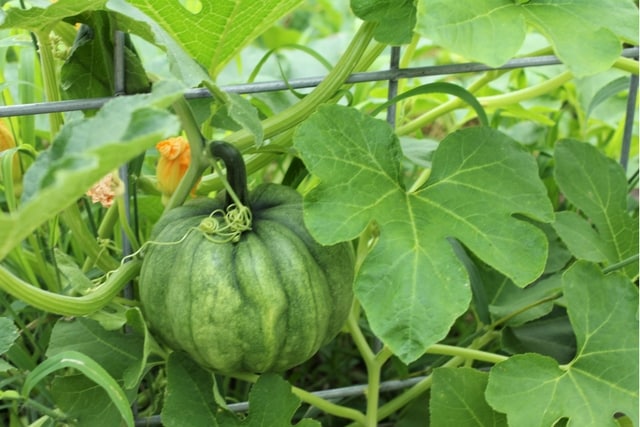 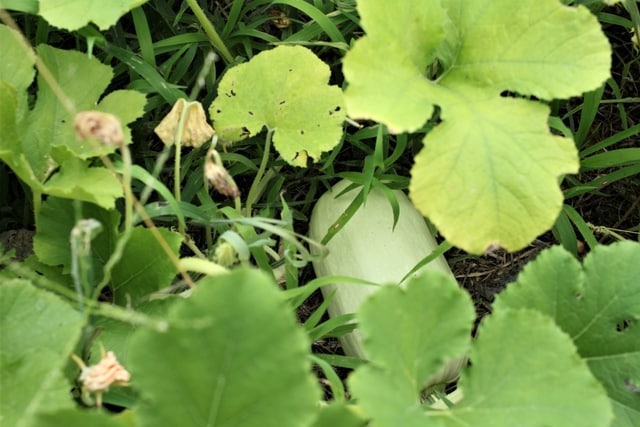 We planted several winter squash varieties including Table Queen acorn squash (two photos above), spaghetti squash and pumpkins. Esther actually planted the pumpkins. She wanted to try to raise a milk fed pumpkin like Almanzo Wilder did in Farmer Boy. The pumpkins are just beginning to set fruit so she’ll have to pic the one she wants soon. 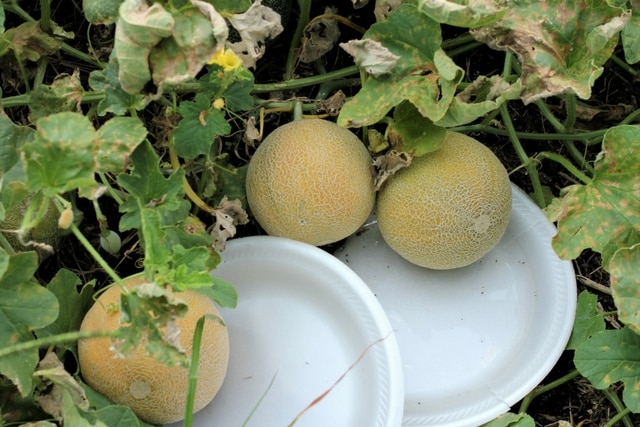 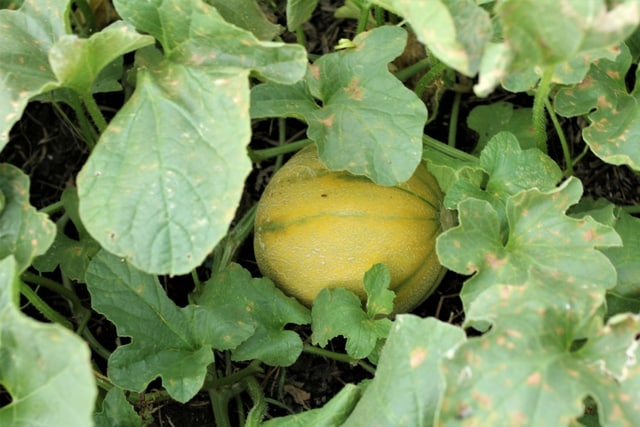 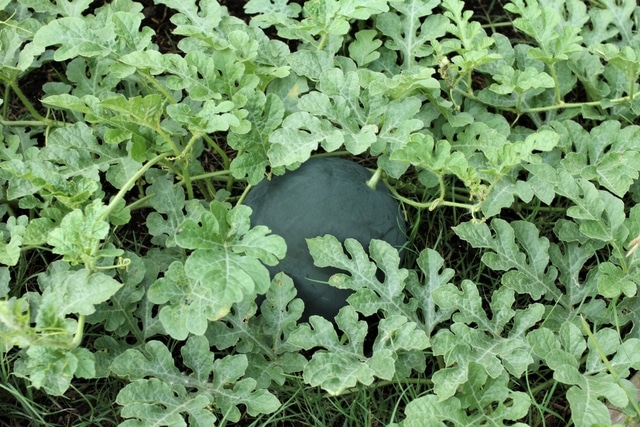 We have several melon varieties, too. We’ve already harvested some Minnesota Midget muskmelons and they were super good. They’re really small but perfect for one of two people. We also planted some honeydew melons, honey rock muskmelons, and sugar baby watermelons. The muskmelons are all struggling with powdery mildew. I’m spraying with baking soda and it’s helping but not a lot. 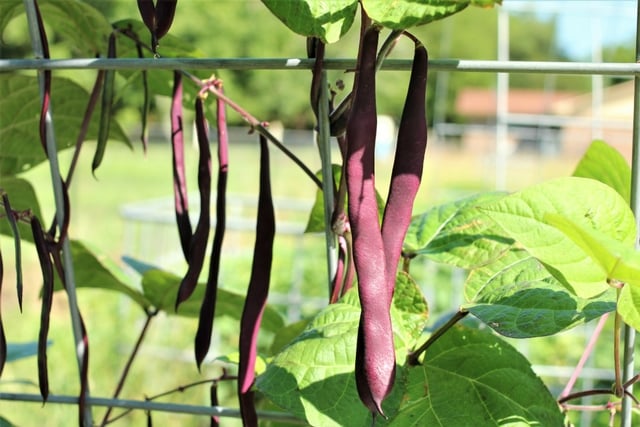 The beans are going well too even though we planted them about a month late. We planted Purple Podded Pole Beans and Emerite Pole Beans for the first time. The purple beans have been super prolific. They are also beautiful, don’t have strings and taste great! We also have some small Tarheel green beans and they are also prolific and taste great. But they have a string, which my kids really hate.

Our tomatoes are really slow to ripen this year. We planted them a few weeks late so I’m sure that has something to do with it but even so, we’ve only harvested five regular tomatoes and four cherry tomatoes. But that’s how it goes sometimes. I’m hoping for a good tomato harvest but if not I’ll just get the tomatoes we need from a local farmer. There’s plenty to celebrate in the May garden even without tomatoes. 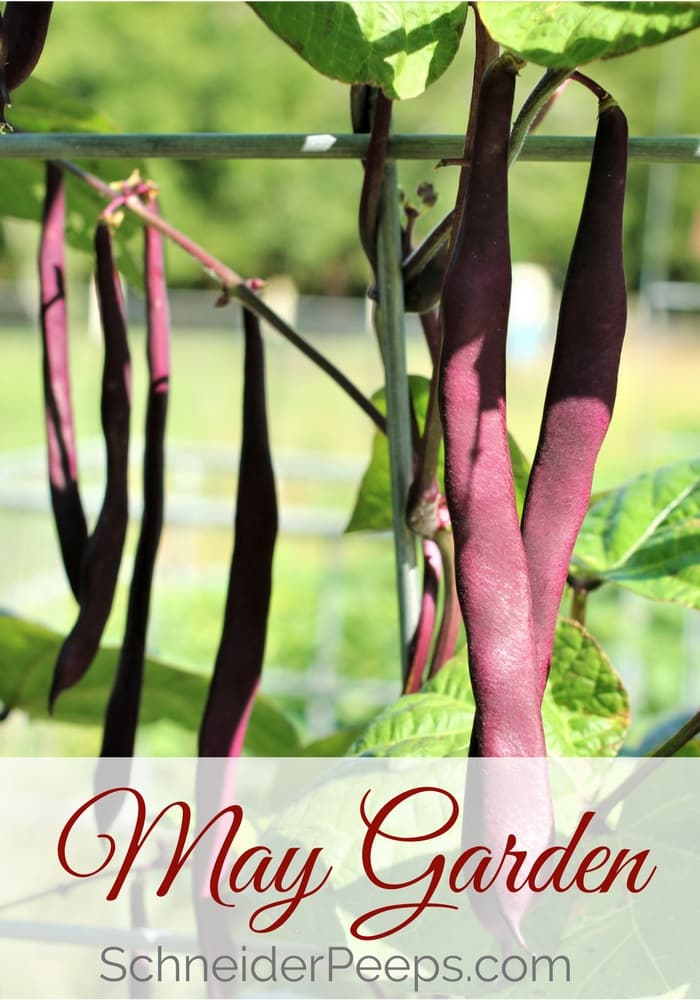