Categories In the Kitchen, Recipes 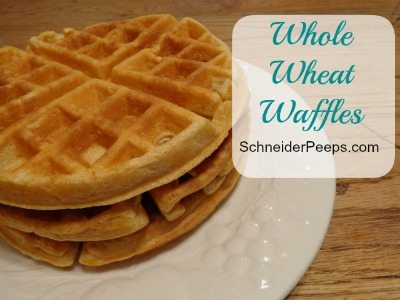 I probably shouldn’t admit this, but my poor husband has to fend for himself for breakfast. Even if I’m up when he is getting ready for work, I can’t ever get it together enough to make a hot breakfast for him.

So here’s our routine, every couple of weeks I make tons of waffles for breakfast one morning and we freeze the extras for Carl for breakfast. It probably won’t win me any wife of the year awards, but it works for us.

We have three waffle irons and I usually use all three, the Hello Kitty one just gets used for waffles we’re eating that morning. It’s funny which boys will eat the Hello Kitty waffles and which ones won’t… and why.

Preheat waffle irons. Separate the egg yolk from the egg whites. Put the whites in a bowl to beat (or use a stand mixer and beat the eggs while your mixing the other ingredients). Mix the dry ingredients in a very large bowl. Add egg yolks, oil and milk all at one time. Mix until there are no lumps in the batter. Beat eggs until stiff if you haven’t already done so. Fold the egg whites into the batter. Cook in waffle irons. Cool before freezing.

~ county fair ~
← Previous
In the garden...starting seeds
Next →
Click here to cancel reply.