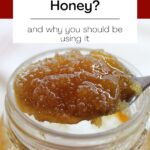 Throughout history honey has been used as a sweetener and medicinally and for good reasons, it tastes delicious and has many antimicrobial and healing properties. Over time we’ve figured out ways to alter and standardize it for the for purpose of making the processing faster and increase profits. This has lead to some confusion over what is raw honey, pure honey and just plain ol’ honey.

What is Raw Honey?

Raw honey is honey minus the comb (or maybe with the comb). The National Honey Board has this to say, “While there is no official definition of “raw” honey, it generally means honey that has not been heated or filtered.”

“Raw Honey” means honey as it exists in the beehive or as obtained by extraction, settling, or straining; and that has not been heated above 118 degrees Fahrenheit during production or storage; or pasteurized.

I’m here to tell you that if honey has not been heated or filtered, there will probably be some bulk to the honey. It won’t be like syrup. It might (probably will) crystalize quickly and it may even have some wax cappings in it.

When you buy honey at the store, it’s been pasteurized which means it’s been heated up to over 160 degrees. Commercial honey producers do this for several reasons. It reduces the possibility of the honey crystalizing, it kills yeast which could lead to fermentation and (this is what most honey producers don’t mention) heating the honey makes filtering go so much faster. Most of our food system is based on looks and quantity. So this makes a lot of sense for those large scale honey producers.

The problem with this is that the beneficial bacteria and microbes are destroyed at 140 degrees. That means that although pasteurized honey is fine as a sweetener, it no longer has it’s medicinal benefits.

You probably won’t find raw honey in a store. If you do find some labeled “raw”, I suggest calling the company and asking about how they process their honey to determine if it’s truly raw. Your best bet for finding raw honey is asking around for a local beekeeper or raising your own.

Yes, raw honey is safe for the vast majority of people. However, it’s important to not give honey to babies under 1 year old. There is the rare possibility of infant botulism.

But for everyone over the age of 1, raw honey is not only safe but healthier than most of other sweeteners.

Is Raw Honey and Pure Honey the same thing?

If you’re buying honey from a store and the label says “pure honey” it has probably been pasteurized and is not raw.

Which is Better Raw or Organic Honey?

With most livestock, you know exactly what they are eating and where they are roaming, not so with bees. Bees usually forage within a 3 mile radius of their hive but can forage up to 5 miles away.

In order for you to know that the bees are foraging only organic plants, the beekeeper would have know, at minimum, that all the plant for 28 -78 square miles around the hive were free of fungicides, pesticides, synthetic fertilizers and not be genetically modified. There’s no place in the US that can do that.

What about organic honey you can buy in the store with a USDA Organic label? If you look closely at the label, you’ll see that this honey is imported from countries such as Canada, Brazil, Mexico, and Uruguay. Basically, the USDA accepts the organic certification of these other countries. Fox Hound Bee Company has a fantastic article on this.

While you won’t find organic local honey, you can talk to the beekeeper and make sure that he is using organic practices in his apiary. The USDA does have guidelines for that because the apiary (bee yard) is an area that the beekeeper can control.

So, which is better, raw honey or organic honey? My opinion is that raw local honey is better than organic honey – better for me, my wallet, my local economy, and for the global environment.

Where to Buy Raw Honey

The best place to buy raw honey is from a local beekeeper. If you don’t know any, call your county extension office or farmer’s market and ask if there are any beekeepers in your area. I bet there are.

If there aren’t or if they are out of honey (which often happens in late winter and early spring) here are a couple of online honey shop to try. I’ve had honey from both of them and they’re excellent.

Leeco Honey is a fourth generation bee farm in Lexington, Texas. They sell raw honey, lip balm, and even have an adopt-a-hive program.

Unlike regular, store-bought honey, raw honey will look different depending on the hive and harvest. During harvest, we’re always amazed at why one hive may have light, liquid honey and another hive will have dark, thicker honey. We’ve had some honey that is as dark and thick as molasses.

It all depends on what flowers the bees have been visiting. And how long it’s been since that hive has been harvested.

The longer the honey is in the honeycomb, the darker and thicker it tends to be.

When first harvested, raw honey will be liquid, although we have found honey that crystalized in the comb a time or two, just like regular honey. Over time, raw honey will crystalize, it’s one of the signs that the honey is, in fact, raw.

Crystalized honey isn’t a big deal, you just have to scoop it out instead of pouring it. However, there is a way to decrystalize raw honey to make it pourable without destroying the beneficial enzymes.

No, honey does not expire or spoil. Like other sugars, honey is a natural preservative and does not go bad.

That being said, it can crystalize and/or ferment over time. But neither of those things makes it bad or unsafe to use.

If it crystalizes, just scoop it out or decrystalize it as mentioned above.

To prevent honey from fermenting keep it in a sealed jar and don’t double dip with your teaspoon.

Like other fermented foods (not spoiled foods), fermented honey is actually full of beneficial microbes and enhances digestion. In fact many herbalists intentionally ferment honey with fresh herbs.

How to use Raw Honey

Sweetener – Honey makes a great sweetener as it’s sweeter than sugar so you use less. If you have limited access to raw honey I would suggest not using it in things liked baked goods that are heated above 140 degrees.

Wound Care – Because honey has both antibaterial and antifungal properties it makes a great salve for cuts, scrapes and sunburns.

Skin Care – Honey can be used for making lip balms, lotions, and sugar scrubs. Some people even dot it on their acne to help clear it up.

Allergies – If the raw honey is local to you, it can be used to help with seasonal allergies…maybe. You need to make sure the honey was made during the time that whatever you are allergic to was blooming. If a beekeeper harvests several times a year this is something to ask about. If he only harvests once a year it’s not an issue. Also, you need to take a teaspoon (both morning and night) for several months to see benefit. So this is something you will need to do BEFORE you start having allergy symptoms. Here’s how to use honey for seasonal allergies.

Indigestion Relief – Raw honey can also be used to help with indigestion. I wish I would have known this when I was pregnant with Esther.

Thank you for the info. I live in a major city where its hard to find raw honey or a beekeeper, which honey would you recommend from a grocery store or supermarket ?

Hi Shaheen, that's a tough question. For sure I'd look for a honey that is from the US (I'm assuming you live in the US. If not, then from the country where you live.) I've seen honey in our local grocery store that is a "product of USA, Brazil, China, Mexico" all mixed up together. I would never recommend buying that. If there was a honey that said 'raw" on the label, that's the one I'd probably buy, even though I know that "raw" isn't a regulated word for honey.

Does your city have a farmer's market? If so, that would be a great place to start looking for raw honey. Farmers usually have a great network of people that are involved in all levels of agriculture. Another option is to contact your local county extension office and ask if there are any beekeepers in your area. We used to purchase from a beekeeper we found through a local farmer. I'd buy a couple of gallons at a time so I wouldn't have to drive out there more than twice a year.

Raw honey is good, but would you want to eat the debri as well ? perhaps broken off pieces of bees wings, legs, tail, tentacles ? debri from flowers like flower hair ? petals ? etc, etc ?

We do filter ours through a mesh screen that catches all the big debris but won't filter out the smaller debris like the pollen which is super beneficial. It is still raw because it's not been heated and the pollen is still in it. When commercial honey producers filter their honey, the heat it up so it will filter faster through mesh that is so fine it will filter out the pollen. This helps the honey to have a more consistent taste which their customers want. The debris you mentioned certainly won't hurt you but everyone needs to do what they are comfortable with.

I would like to try it in my granola recipe.

Okay great to know! Thank you for your reply. I just happened upon your blog and love it!

I always purchase local, raw honey and was never told anything about fermentation. This concerns me since I am the only one in my home that eats the honey and the jar always lasts a while. How do I know if it is still safe to eat? At what point should I throw it out.

Amie, just because it can ferment doesn't mean it will. We live in a very humid climate and rarely have it ferment. We make sure that we keep our honey covered with it's lid and we don't EVER double dip. We had a friend whose honey did ferment and when I questioned her about what she was doing she said that she puts the spoon she stirs her tea with back into the honey jar to if she needs more since she's the only one who eats it. That's a no-no. People actually make a wine out of fermented honey. I'm sure your honey will be just fine until you finish the jar. My point in mentioning fermenting honey in my post is that it's one of the reasons that commercial honey producers use to justify pasturizing their honey. Hope that helps.