For the vast majority of our marriage, Carl has been the sole income provider for our family. There were things, like being home and homeschooling our children, that we thought were more important than me staying in the workforce. We’ve never regretted that decision – even when we experienced a four year season of unemployment.

Yep, you read that right, from April 2008 until May 2012 Carl did not have a full-time job. He worked several part-time jobs concurrently to provide for us. That four year stint of unemployment taught us a lot. One of the most important things we learned is that we can do more that just survive unemployment; we can thrive during it.

In May 2012, Carl was offered his dream job of being a full-time hospice chaplain for a hospice that was new to our area. Then, in May 2013, they closed their office and he was unemployed again. The next eight months were a rollercoaster as another hospice hired him and worked hard to figure out a way to make his position full-time. Finally, at the beginning of this year, he has a full-time job.

I share these things so that you know, we’ve been there.  We’ve talked with many unemployed people and have noticed that those who just try to survive unemployment and put their lives on hold while they wait for someone to give them their dream job, really struggle personally and financially. We’ve also noticed that people who do more than just try to  survive unemployment, do not struggle as much in their personal or financial lives.

About a year ago, after a conversation with a young married couple who were facing unemployment, we felt like we needed to share our story more publicly. The husband was not able to find full-time work and so wasn’t working. The wife just had their first baby and was scared. His parents were helping them out and were getting bitter about the situation. At one point in the conversation, the young man said, “You just don’t understand. You have a Master’s Degree.” Carl corrected him, “I actually have two Master’s Degrees… and three part-time jobs to provide for my family.”

So, we began working on Hope-Thriving While Unemployed.

But it’s not just about our story; it’s about your story.

Hope – Thriving While Unemployed  is full of ideas to help you write your own story as you walk through your season of unemployment – a story that doesn’t include just surviving. We’ve gathered ideas and tips from people who are writing their own thriving story and put them in this ebook. We’ve also included simple printables to help you get organized.

Today, we release our new “baby” into the world hoping it will bless and encourage those who are unemployed. And we’re celebrating these next two weeks.

If you purchase Hope-Thriving While Unemployed on or before August 5, 2014 you will receive a downloadable bonus pack. The pack includes,  Unhinderedly {a seven day devotional}, Easy Meal Planning, ReThinking Beans and Rice ebooklet, Household Responsibilty Charts, coupons for spouses and parents to give each other.

We’ve also put together an amazing resource page to help you. We’ll be adding to it as we find other resources that are helpful and encouraging. 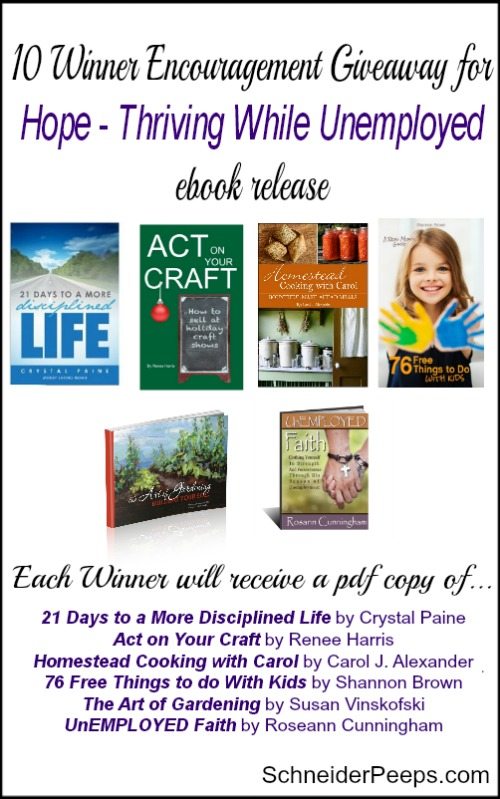 We also have a really cool giveway for 10 winners! Each winner will receive a copy of each of these six ebooks…

21 Days to a More Disciplined Life by Crystal Paine

Act on Your Craft by Renee Harris

76 Free Things to do With Kids by Shannon Brown

The Art of Gardening by Susan Vinskofski

The fine print – The giveaway ends at 11:59pm  (CST) on Tuesday, August 5, 2014. Ten winners will be randomly chosen. Winners will be contacted via email so the giveaway is open to anyone with a valid email.

We remember well the times we didn’t have five quarters to spare, let alone five dollars. So, if you are currently unemployed and cannot afford to purchase this ebook we would love to give you a complimentary copy – just email us at [email protected] and ask. But here’s the deal, if you ask for a copy, please read it and put it into action…and let us know how it’s helped you.

I BTDT too ... ended up in bankruptcy after I got laid off the second time. I got a nice severance both times, but it was not enough to last three years (first time) and two years (the second time). This was before I was gardening even knew what a homesteader was. It was hard. A very painful time in my life. What I learned is that no one is immune, no one is truly secure, and no one should take anything for granted. Also learned that I better learn to grow my own food in case I ever really NEEDED to. I thank God every day for every blessing! I would love to read your book! I hope it goes well ... I am sure it will. -- love, Jo

We lost our house 2 years ago due to decrease in pay (the company we worked for closed & after finding new jobs our combined income was $8. hr less). We rent now and decided I would stay home and help out my kids by watching our grandkids & soon to start homeschooling. We made sacrifices to live on one income but, I wouldn't trade it anything. We started a garden and have chickens & rabbits. We are always hopeful that my husbands job will be around for a while but, don't know what we would do if it weren't. He has worked his way up and would have to start over making $5. hr. less anywhere else.

Thank you for sharing your story. It is very inspiring to hear from people like you and your husband who are living generously even while you've had your own hardships.

My husband has been unemployed for almost 2 years and can not collect unemployment. He was also unemployed 5 years ago for over a year after working for the same company for 25 years. I now work part time for minimum wage and we are always struggling to figure out how to pay the bills and buy food, and keep gas in the car so I can make it to work. We have canceled the phone and the cable. We never have money to take our kids out for an ice cream or buy them new sneakers, etc. Our home is in foreclosurer and we have no idea where we will live when that goes through. We are trying to trust the Lord, but it's really hard.

Robin, thanks so much for sharing your story. We have been there. In fact, we spent 6 weeks living in campers in an RV park. I joked that we were semi-homeless but the reality is that it was a scary time. I've emailed you some information. Blessings, Angi