Home » The June Garden
This post may contain affiliate links. If you click on a link and make a purchase I may receive a commission. Thank you for supporting this site. 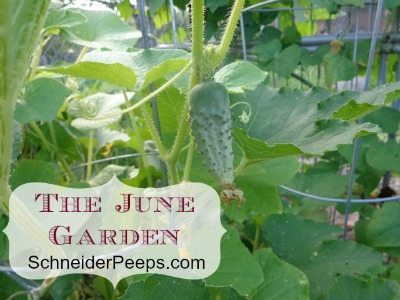 Our June garden is just amazing this year! I’m trying really hard to enjoy it as I know we only have about another month of harvesting. We’ve been harvesting tomatoes, green beans, squash, zucchini, onions, basil and cilantro.

We also harvested the buckwheat and are saving the seeds to replant. I’ll do a full post on this experiment a little bit later but I will say that the beds that had the buckwheat didn’t have many weeds at all. 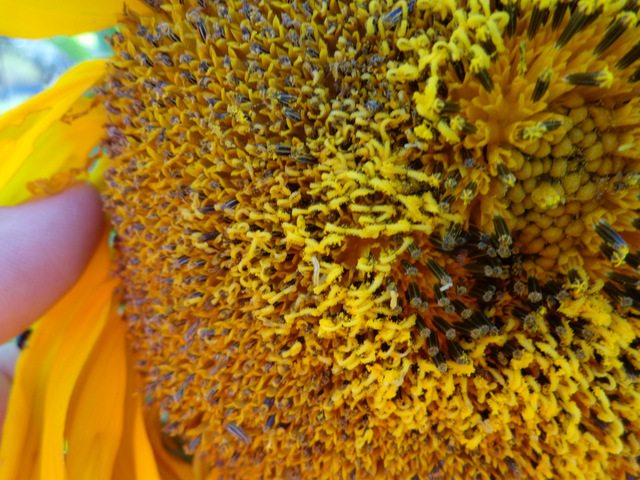 I planted these giant sunflowers as a sacrifice crop to help with the leaf footed bugs. I’ve not seen any leaf footed bugs on them but I’m enjoying them. I’m hoping to harvest some seeds for the chickens. 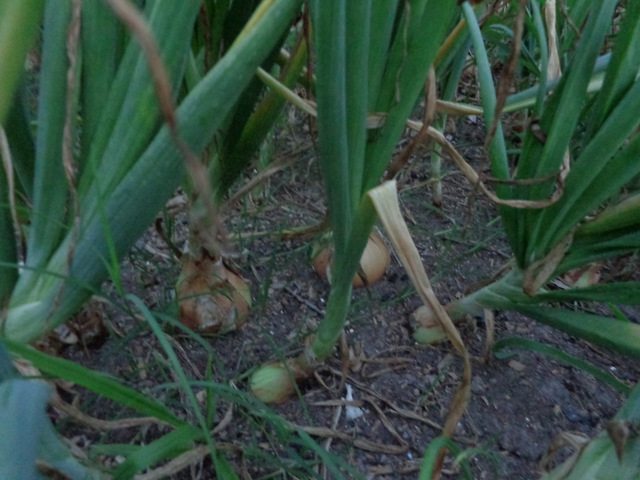 I will never buy onion sets again. These are onions I planted by seed in January (which is late for our area) and they are doing so very well. We’re pulling them as we need them to cook with. 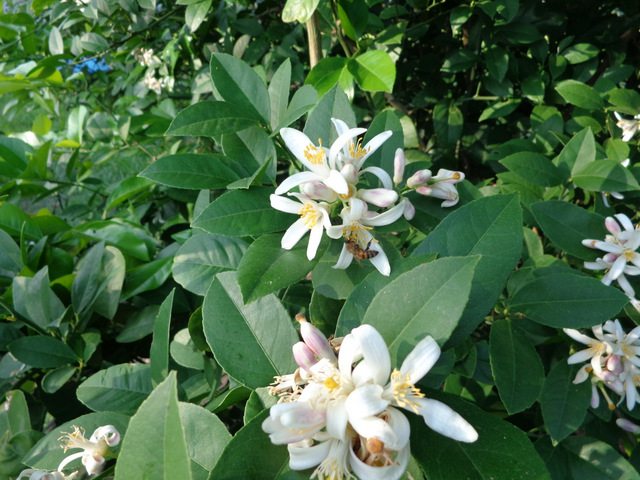 Our lemon tree dropped all of it’s fruit from when it bloomed early this spring. A few weeks ago we had several days of rain and when we go back from vacation the lemon tree was blooming again! I know that citrus can bloom year round, I’ve just never actually seen it. I hoping we have some lemons this year. 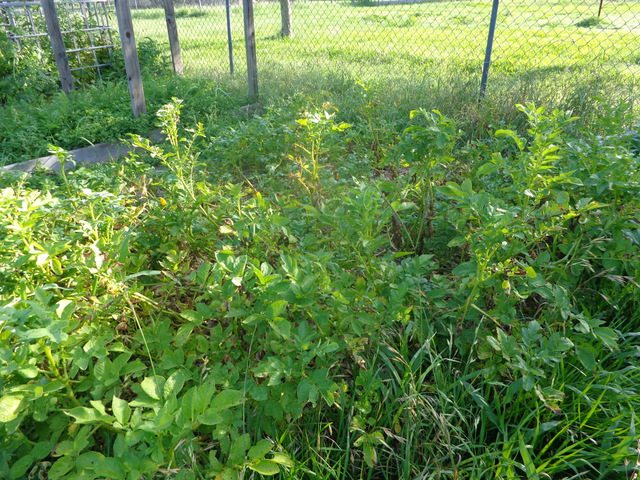 Every day our potato patch gets just a little closer to being harvest. We’re waiting for the last of the plants to die off and then we’ll harvest. I’m going to plant buckwheat in this bed after we harvest the potatoes to get it ready to plant garlic this fall. 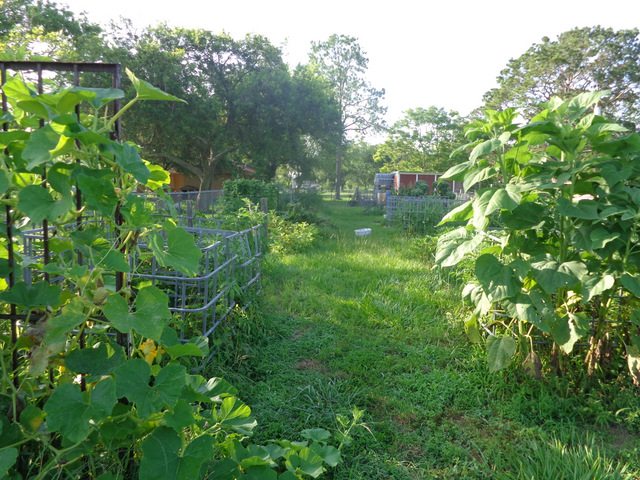 Here’s a bigger veiw of the garden. One day all these pathways will be filled with woodchips instead of grass. In the meantime, we’ll just mow. 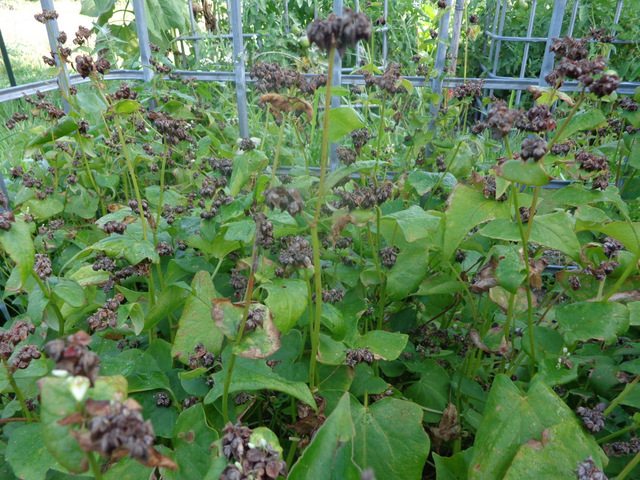 This is the buckwheat before we harvested it. We cut it at the base and left the roots in the ground. Once we shake off the wheat we’ll use the stalks and leaves to mulch with. 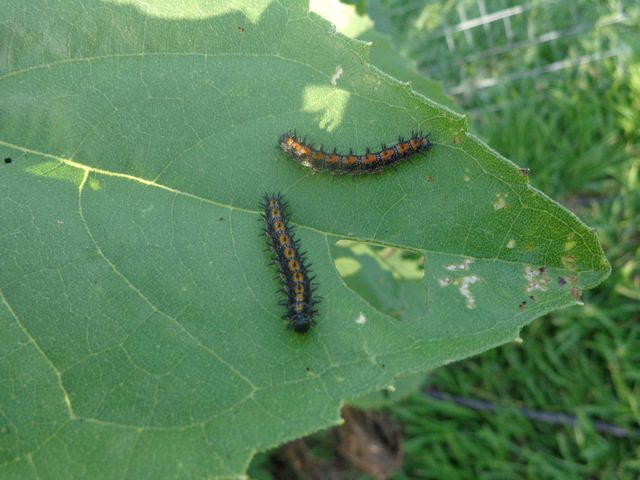 These catapillers have been enjoying the sunflower leaves. Better them than any of our other edibles. 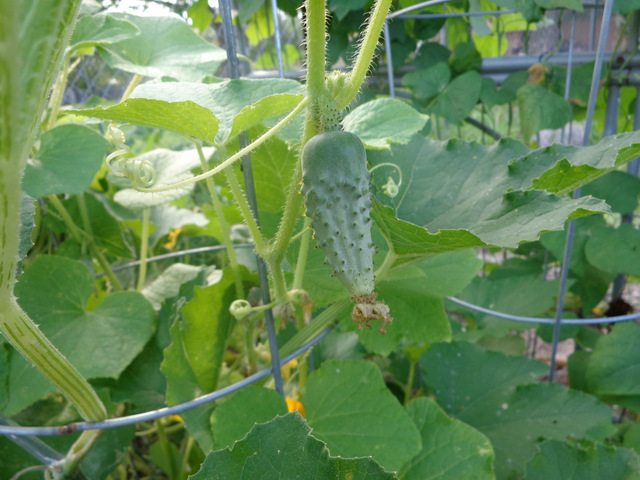 I have cucumbers! I’m so happy that I decided to plant regular cucumbers and not just the lemon cucumbers. 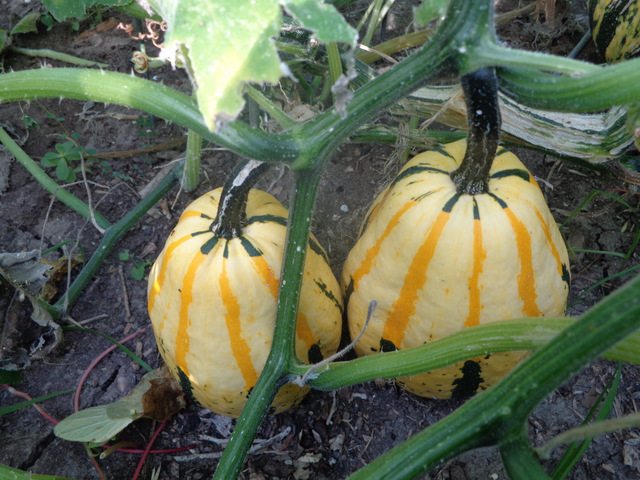 And these are the mystery squash/gourds. They were supposed to be lemon cucumbers – that’s what the packet said – but they’re not. Which is why I’m happy I also planted some regualar cucumbers. These are pretty, though. I’ve decided to let them grow and when the vine dies, I’ll harvest them. I’ll probably cook them like pumpkins. 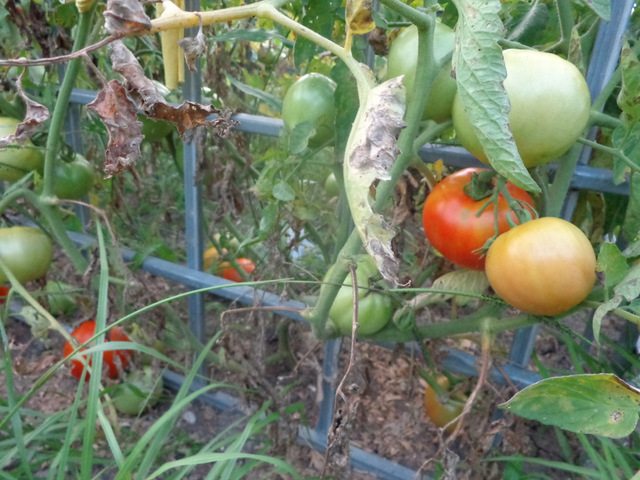 We’re picking tomatoes every day. I don’t really have time to can right now so we’re cutting out the stem and putting them in the refrigerator. As usual, the Celebrity tomatoes are producing way more than any other variety. 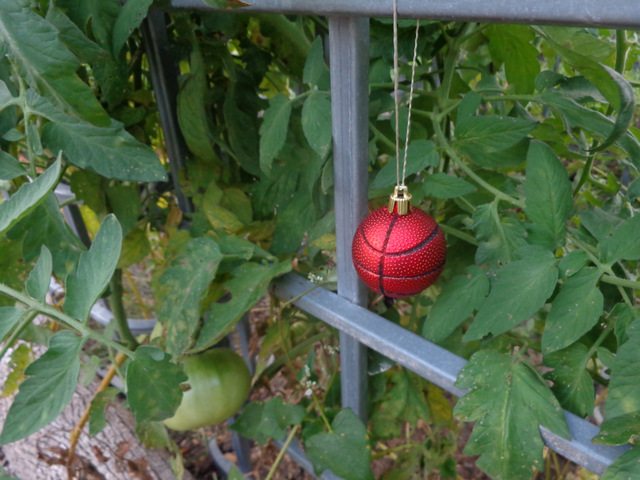 This is our attempt to deter birds from eating our tomatoes. After Christmas we bought these ornaments (the only kind of red ones we could find at the time) on clearance for a dollar for a pack of 12. We’ve had them on the cages, so hopefully any birds that want our tomatoes have already pecked at them and think our tomatoes are no good. 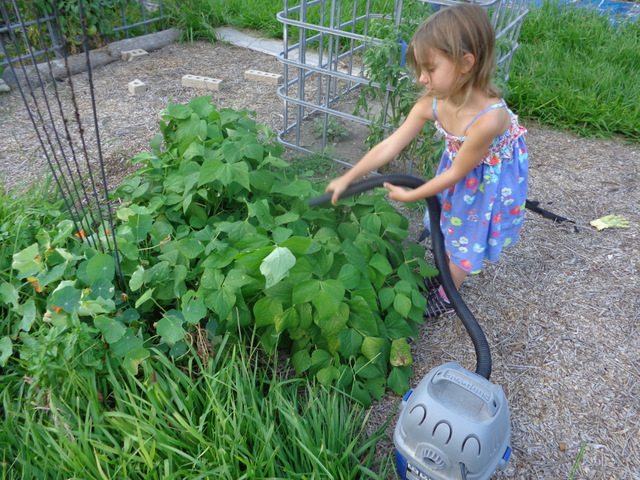 We’ve never really had whiteflies until this year. They are multiplying so fast that our lady bugs just can’t keep up. So, I decided to give them a little help. Shaking the plants and vacuuming whiteflies is a great job for a 5 year old. If you have any other suggestions, I’m all ears! 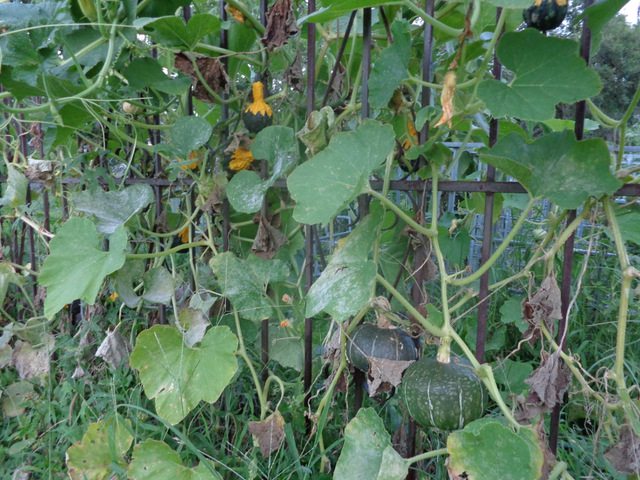 These are our ornamental gourds. I think the two pumpkins are going to be white pumpkins. I’m  hoping. As you can see we’re having a powdery mildew problem, too. I could have removed all those leaves before taking the photo but I’m keeping it real. 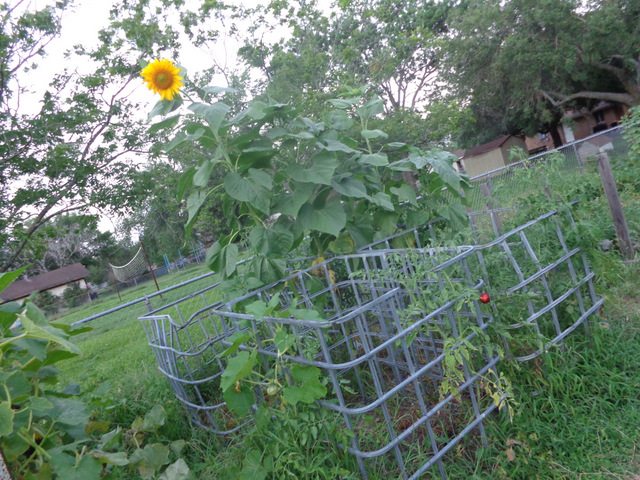 So tell me, how is your June garden going? Feel free to leave links in the comments so we can all see what you’ve been up to.

Along with posting these updates, I’ve been making notes in my gardening notebook. You can get your’s by clicking here. 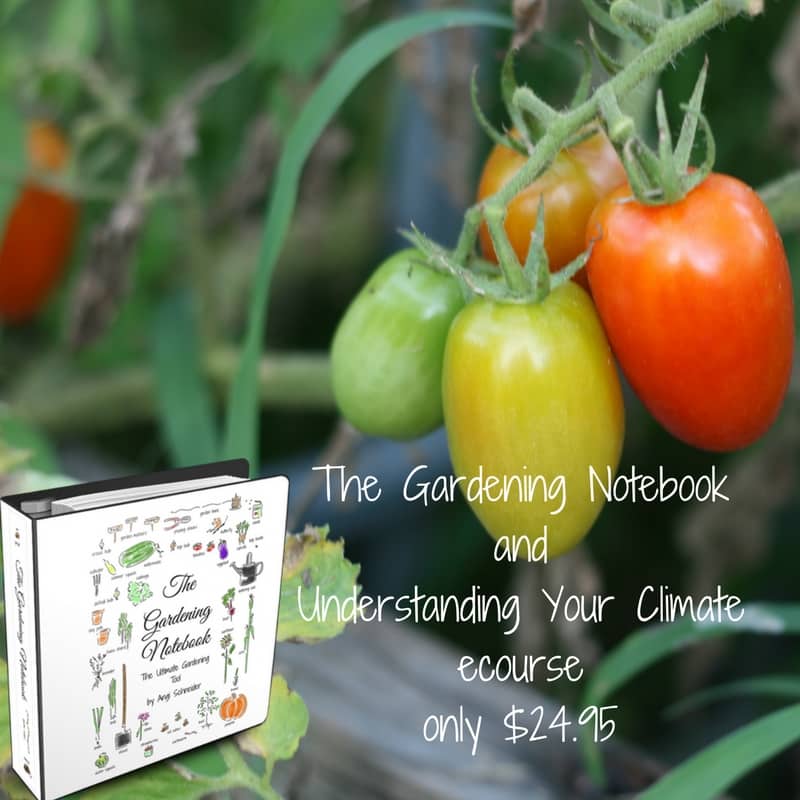 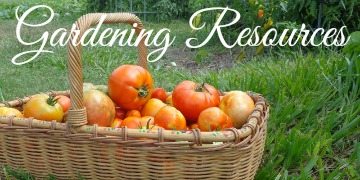