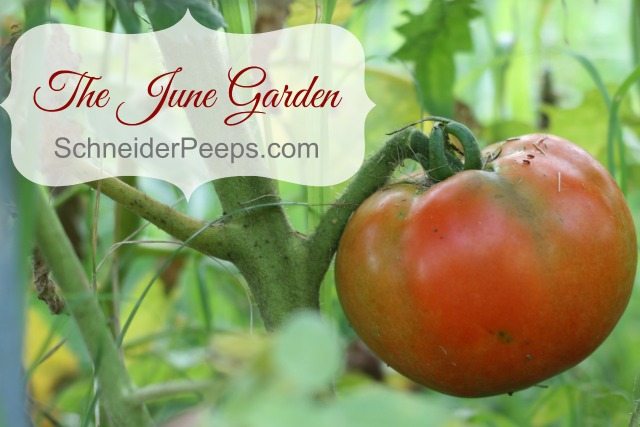 Goodness our June garden has gone through a lot. We started the month harvesting tomatoes, squash and green beans. Then came Tropical Storm Bill which dumped 7 inches on our property in two days. Our ground was already saturated as we’ve already had as much rain as we get in a normal YEAR. Although I’m happy about the drought ending for us, our plants have struggled with all this water. 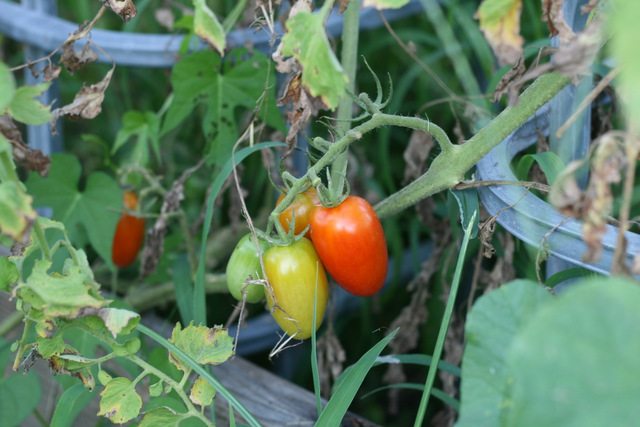 These are Juliet tomatoes I love, love, love them! They are super prolific, much more than Romas are, and they don’t seem to be as bothered by pests as the other varieties are. These are a paste tomato and we’ll definitely be planting them in the future. 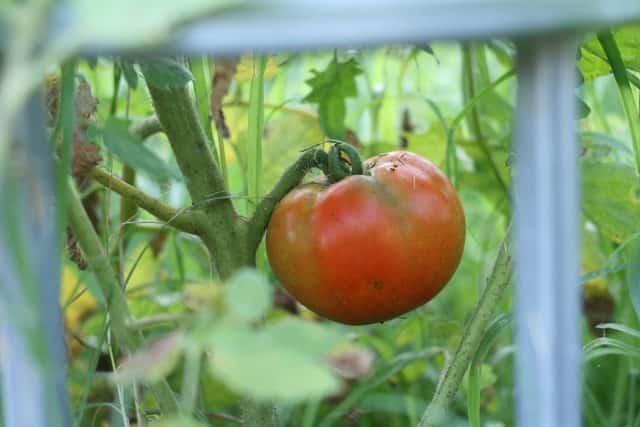 Our homestead tomatoes are doing ok this year. They are much bigger than the Juliets, but they also have much more water in them. They are also more prone to spit in the rain and be bothered by the pests. 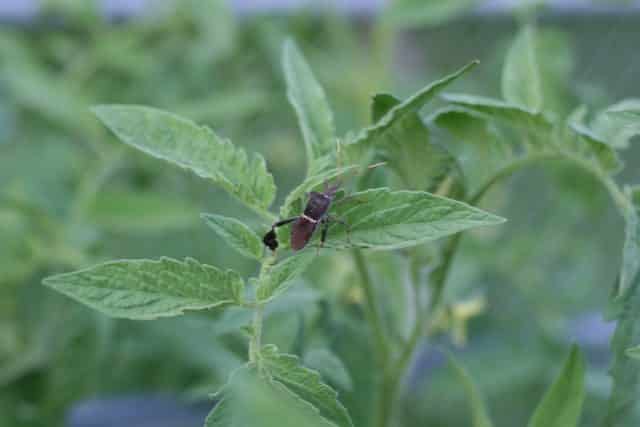 This is the leaf footed bug. We see him every year on our tomatoes but we’ve not seen as many this year. Who knows why but I’m thankful. We do a little hand to hand combat when we see one in the garden, even if it means sacrificing a tomato. These guys pierce the fruit and suck the juice out. It’s sad. Because we have such a short winter, these can go through three life cycles in our area. 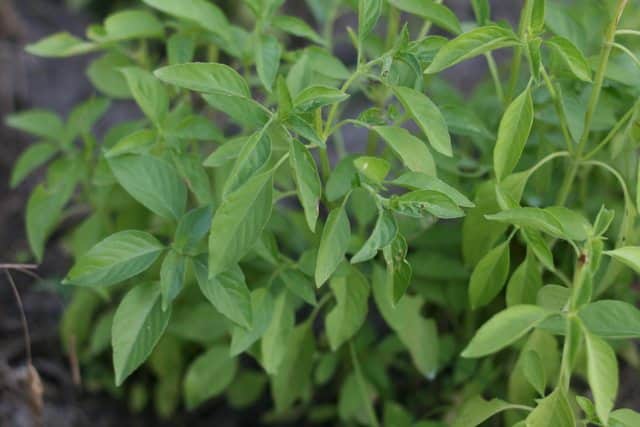 So, I planted four different kinds of basil this year; sweet, Thai, lemon and purple. The purple smells and tastes like the sweet. But the lemon smells like lemon and the Thai smells like licorice. I’m excited to use these in my kitchen this year. 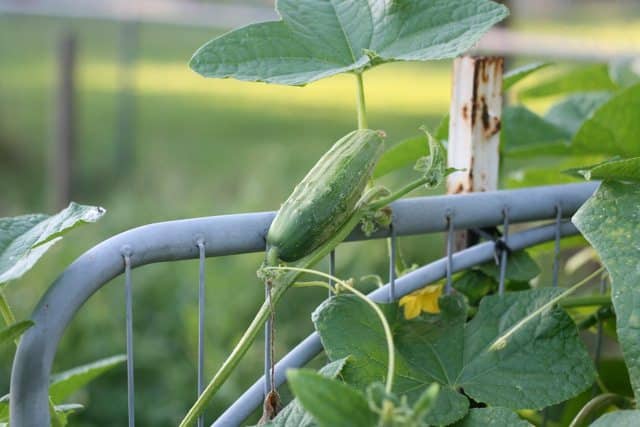 Our cucumbers have done well. We’ve preserved all we need to for the year and now we’re just growing them as treats for the chickens. 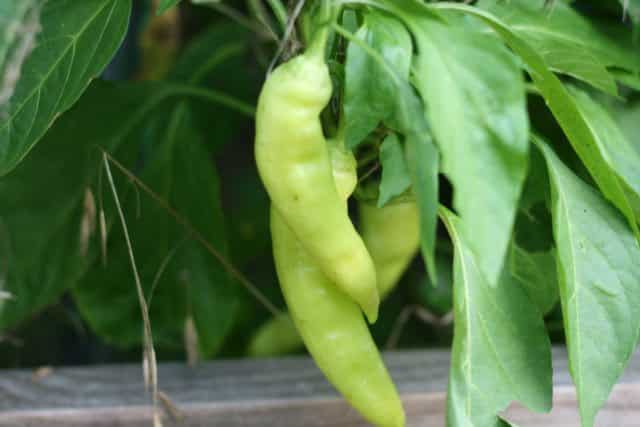 Banana peppers are our favorite pepper. But we like to  pick our peppers when they turn red since it makes them a little sweeter. Once these turn red we’ll ferment them. 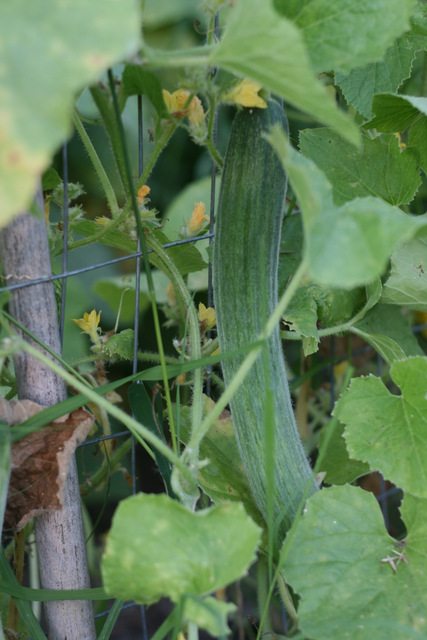 We only got two Armenian cucumbers this year, which is fine since they were our least favorite. This was our first year to grow them. I don’t think I’ll be growing them in the future. 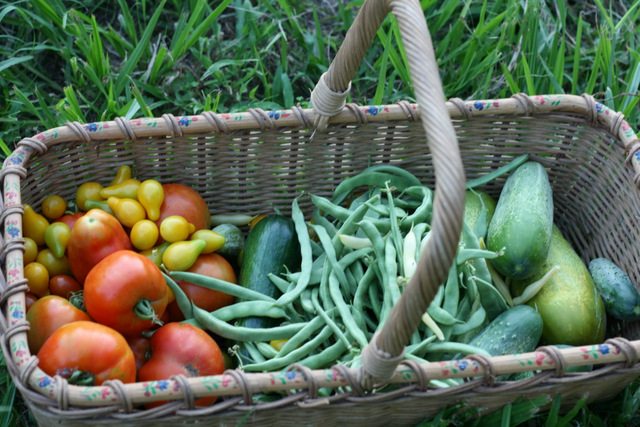 This was one evening’s harvest toward the beginning of the month. Such a great variety. 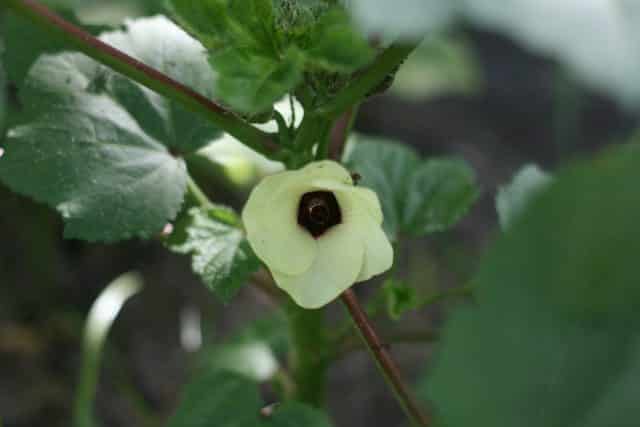 Our okra as blooming and we’ll have okra soon. The flowers are so beautiful I think I’d plant them even if we didn’t actually eat okra.

Our lemon tree has gone crazy with fruit. I’m so happy after not having any harvest last year. Our small Meyer lemon tree and our cara cara orange tree both have fruit on them also but they are much younger so don’t have as much. 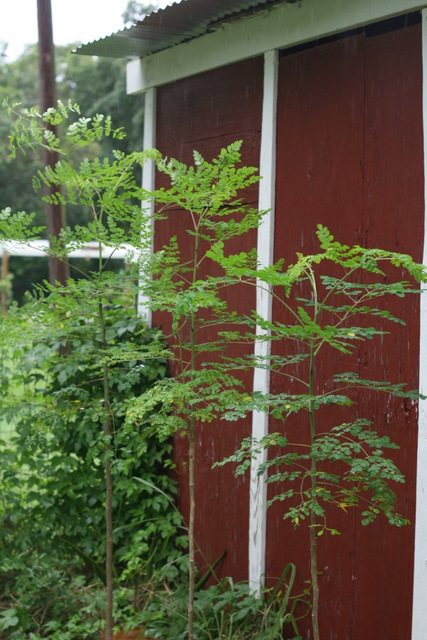 The morning trees are over 6 feet tall. I’ve been meaning to research when to harvest the leaves so that they still continue to grow. No new branches grew where I harvested last fall, so I’ve been hesitant to harvest again. Instead I just talked with Karen from Blue Yonder Urban Farms and she told me that I need to prune them, if I want them to bush out. She would know since she’s the one who I got these from. Also, she sponsoring a three winner moringa root giveaway just for our readers. Because she’s super sweet like that. The giveaway form is at the bottom of the this post. 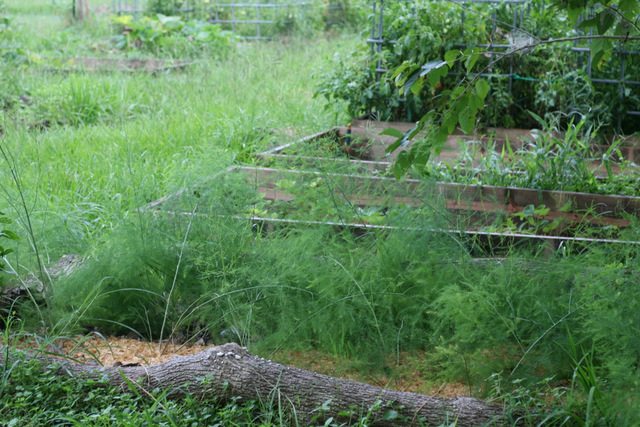 The asparagus bed is doing great. It will be fun in the next couple of years to see how much asparagus we get from it. 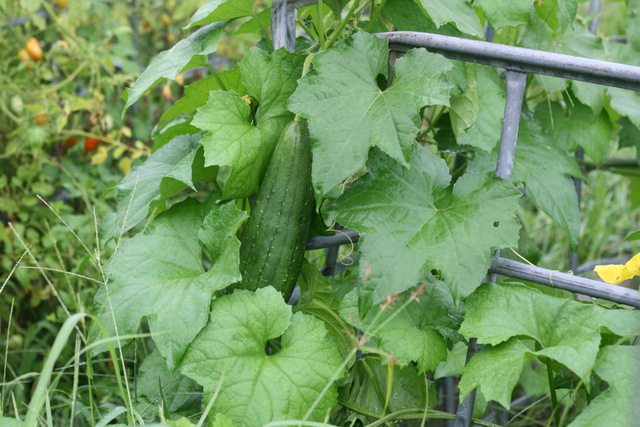 This is a luffa. You know, that sponge thing they sell in the bath section at the store. Yep, it’s a squash. Right now we have two large luffas but the plants are filled with blooms so hopefully we’ll have more by the end of he season. 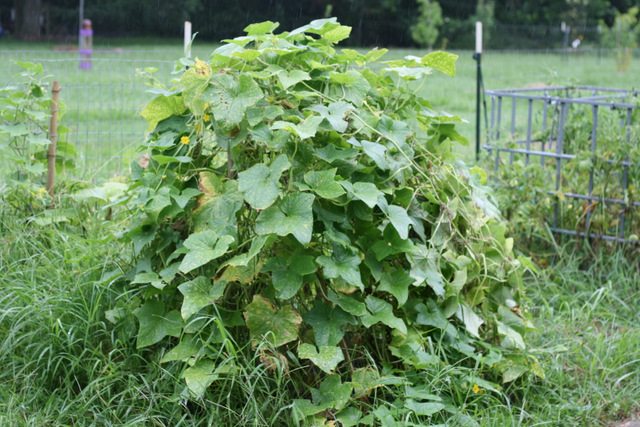 Let’s do a little before and after. The photo above is one of our cucumber patches the morning that Tropical Storm Bill hit. 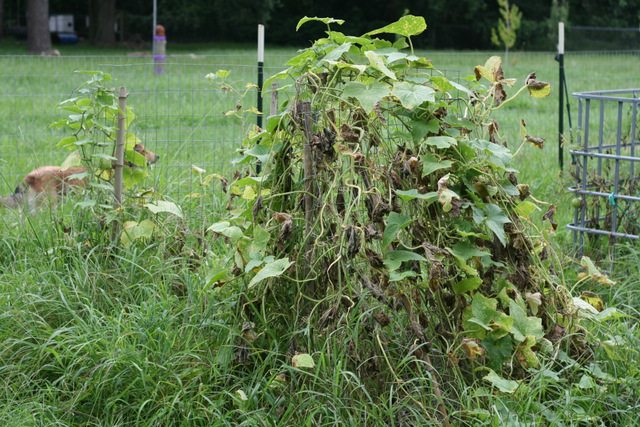 This photo is the same patch a few days after when the ground dried out enough that I was able to get into the garden. They’ve now been pulled and burned. 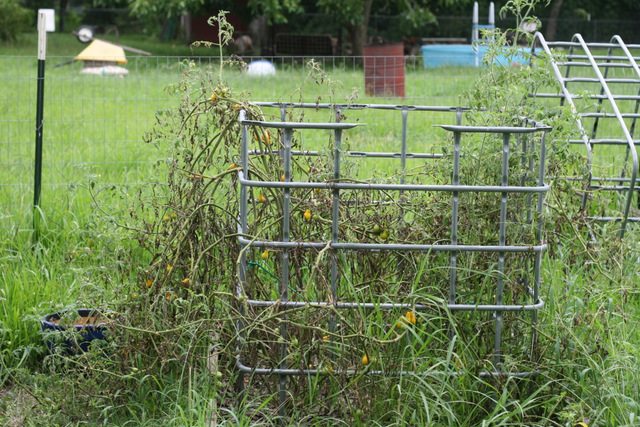 Our yellow pear tomato plant has about had it after all the rain. This plant was a volunteer that came up in our front flower bed last fall. It was the first to produce this spring. But it probably will need to be pulled soon. 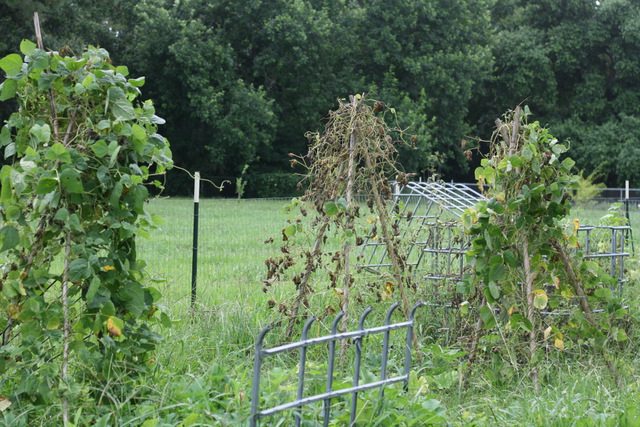 Same with some of our green bean plants. Fortunately, we’ve preserved quite a bit and we’ll replant for a fall harvest soon.

It’s not just the water. It’s the combination of so much water and heat. Plus living in a humid area, we already struggle with powdery mildew. 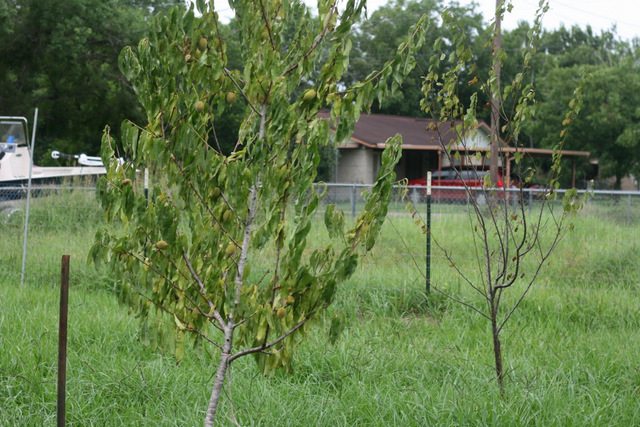 The orchard area (not where our citrus trees are) is towards the back of our property. Our property slops back and this area has been collecting water. We’ve dug trenches to pull the water away from our trees but they are still struggling. The back tree is a plum tree and it has dropped all it’s leaves. The front is a peach tree. This is the first year our peach trees have produced but the peaches are small and still hard. I’m not sure what they are going to do. 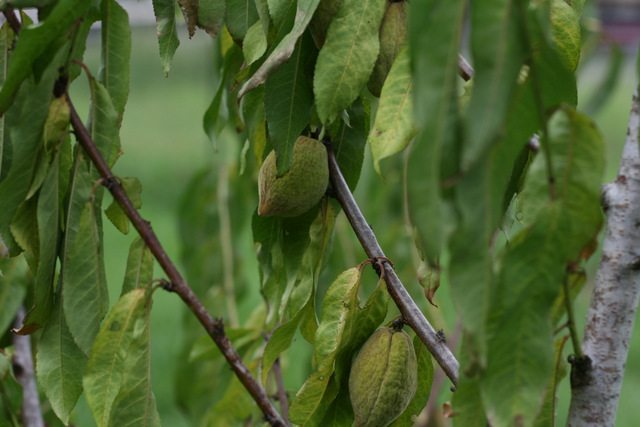 Here is a close up of the peach tree a few days after Bill. All the leaves are droopy like it needs water but the ground is wet. The lower leaves have been steamed by the heat. And the peaches look like they have been stretched and then wilted. 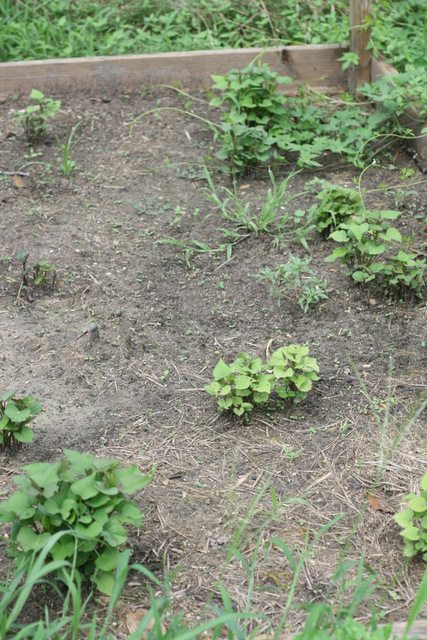 We did find some sweet potatoes in the garage that were left over from last year’s harvest. Some were sprouting so we planted them in the bed that previously had kale and chard. Sweet potatoes need about 120 days and since we have such late average frost date we should be fine.

We’ve had other casualties from the amazing amount of rain we’ve had this year, our potatoes, tomatoes and carrots have all rotted in the ground. But because we’ve had so much rain, I’ve been able to replant squash and zucchini since our original patch was attached by vine borers. Normally, it’s too late to plant anything right now since it will just get burned up.

A few years ago I read an article from Tessa at Homestead Lady about her Garden of Whatever. That’s my garden every year. I start the season with hopes and dreams and plans but really, there are so many variables that by the time I get to June I’m just thankful for whatever we can harvest. That’s part of the gardening journey, no two years are the same. Here is our garden in June 2014 and June 2013

Something super exciting has also happened this month. A friend’s son has started collecting french fry boxed from Chic fil A for me (he works there) and our county has hired a company to trim the trees near the power lines in our area. There is a sign on the truck that says “free wood chips.” We’ve talked to workers and they are dumping the wood chips on our property for us. We’ve gotten one load so far and we gave the guys some jam as a thank you. So, hopefully we get the rest that we asked for. We’re using the cardboard and wood chips in the garden walkways.

I’m making notes in my gardening notebook so I can remember what the season was like. What varieties did well and what really didn’t. If you don’t already keep a gardening notebook, I highly suggest you start. 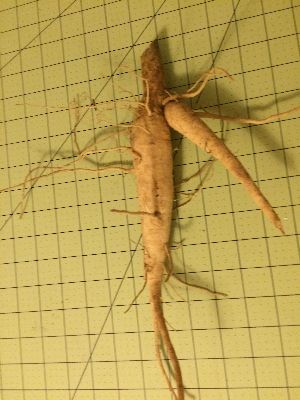 This is a moringa root and it will  grow an amazing edible tree. Not just edible, but a tree that some cultures call The Tree of Life because it is so nutritious. It is also used medicinally. You can read more about the moringa plant in this post.

The fine print – This giveaway is open to those 18 and older who live in the contiguous 48 states of the US. Each winner will receive one moringa rootstock from Blue Yonder Urban Farm. The giveaway is open until July 6, 2015 at 11:59pm Central time.
a Rafflecopter giveaway 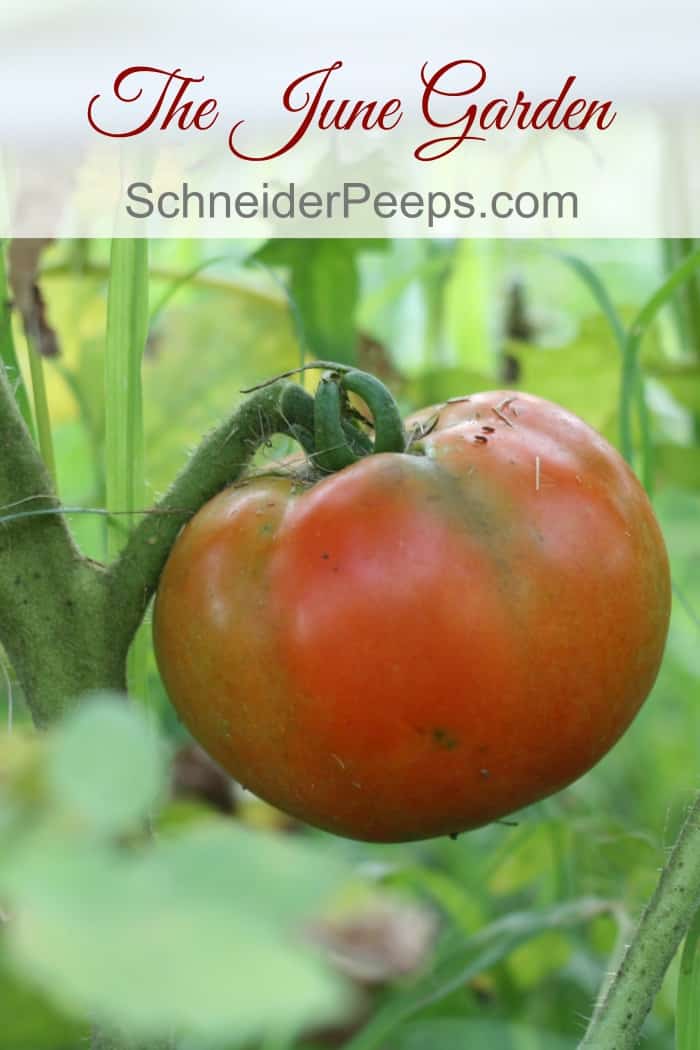 What’s going on in your garden this month?

We have had so much rain so we will be thankful for anything we get. Our cucumbers have done well and we did okay on potatoes and onions. The tomatoes are loaded but still green. We will have our first grilled jalapeño poppers this weekend.

My garden is just getting out of pots & into the ground. I haven't predictably felt well this year' which is the reason for the lateness, but we have a very long growing season so it won't be too bad. Fou kinds of tomato plants went in today. Tomorrow (I hope) will be the cucumbers and hot peppers. Then the rhubarb, which was transplanted from a poor location while I wasn't feeling well, will need to be moved "& then I'll assess where to go from there.

I have a container garden. Have tomatoes, potatoes, lettuce, bell peppers, mint, chives, parsley, beans, and cucumbers. They are all doing well, have eaten some of my lettuce, have lots more though.

I only have a small container garden so far but I have got strawberries, green breans, my tomatoes and peppers are finally starting to flower. I have blackberry and plums that were growing when I moved here so they are doing well.

wow! That is a lot for containers. Good job!

Hi, Your beautiful garden s doing great whereas our garden in canada is just starting to get few flower in tomatoes plant. I don't see bees here this year and almost all my neigbours here are angry because of the late season.

Please I just like to ask you about english cucumber. Where do you get seed or how does you grow ? Keep up the great garden. thanks almas

Hi Almas, I got the seeds for the English cucumber from my Seeds of the Month membership (https://averagepersongardening.com/seedsclub/step_2.php#_l_2f) although I thought the packed said Armenian cucumbers. They looks similar and I may have just got it mixed up in my mind during planting. That happens sometimes. You can get some from Botanical Interests (http://amzn.to/1T7PJfP).

Have you ever visited Northern Homestead (http://norhternhomestead.com)? Anna is a friend and she writes alot about how they keep a garden going year round in Northern Canada. She's amazing!