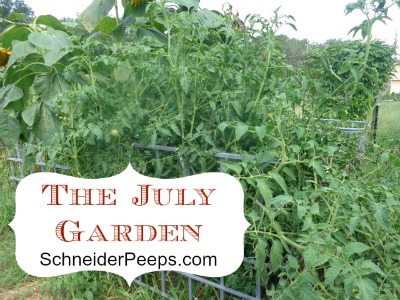 The July garden is South Texas is usually all burned up. However, this year we had a much cooler spring and summer and quite a bit more rain that we’ve had the last few years. So our garden is still going. We’re getting a handful of beans, a few tomatoes, lots of cherry and yellow pear tomatoes and a zuchhini or two a day. But I’ll warn you, it’s not pretty. 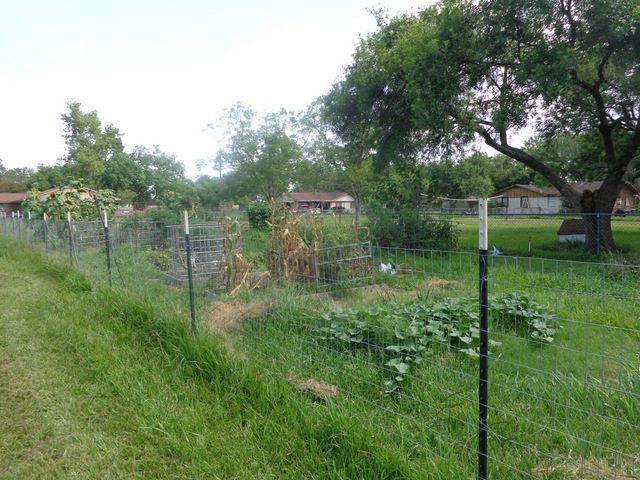 I KNOW we’re over run with grass (aka weeds). We mowed this less than a week ago. We really need to get some wood chip walkways. But until then we’ll just mow. We fenced off the garden so we can let our chickens free range. Also, since our neighbor was kind enough to let all his rabbits go, I need to plant all my herbs that were out front in the garden. 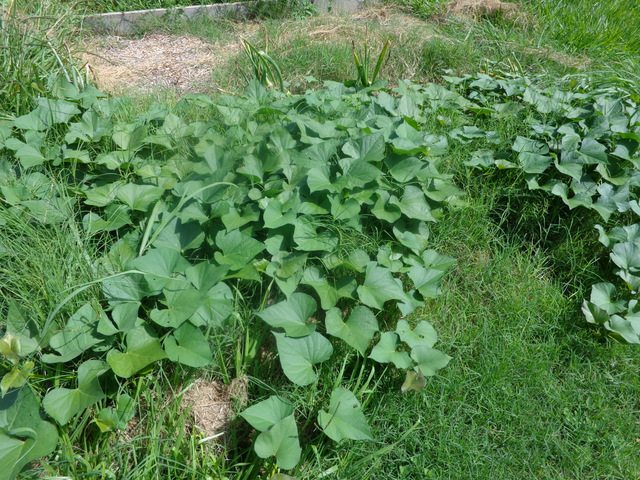 This is one of two sweet potato patches. I just dug up the ones that we overlooked when harvesting last year and took the slips off and planted them. It’s becoming a habit. 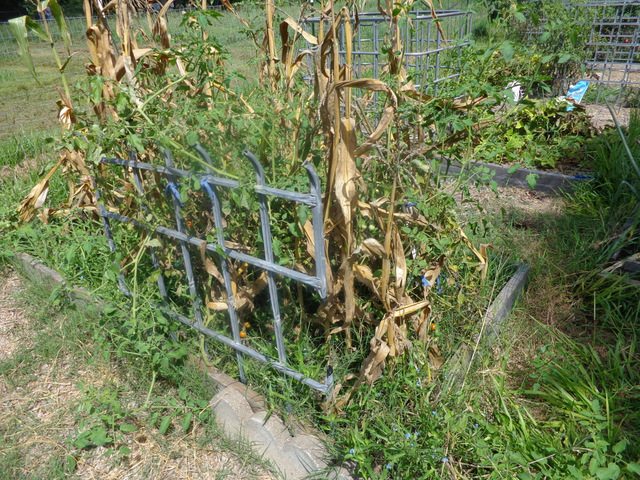 This was our popcorn patch. We’ve harvested all the popcorn but a volunteer cherry tomato plant popped up and I’ve been using the corn stalks to help support it. 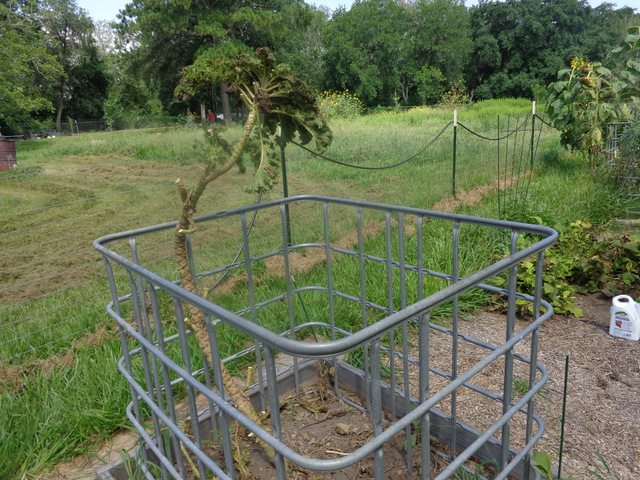 I’m giving up on this kale ever going to seed. It was planted in October of 2012, yep you read that right 2012, which makes it 21 months old and it’s not going to seed. But is has become a wonderful habitat for whiteflies. Which is bad. So, its been pulled given to the chickens. There were actually 3 plants and as I was cutting this last one down I thought to take a photo of it. The bed has been planted with buckwheat as a green manure. 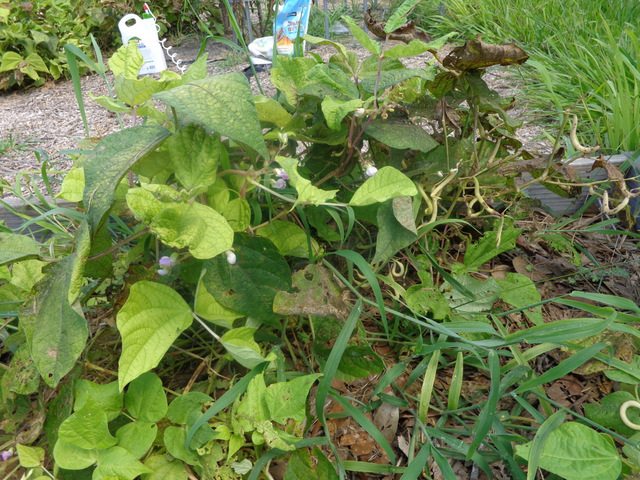 So, the bush beans were next to the whitefly infested kale. You can see the damage they have done. I sprayed with insecticidal soap but the plants are just not healthy. So, we pulled them up and gave them to the chickens. 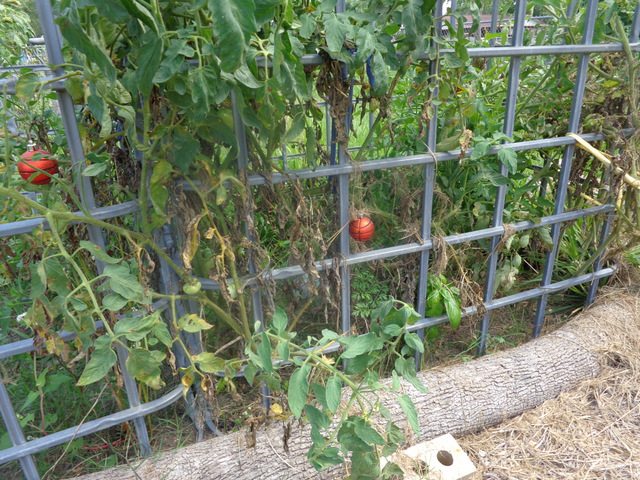 These celebrity tomatoes were some of our heaviest producers this summer. They have a few small green tomatoesleft but they are pretty well spent. I do have some volunteer basil and carrots coming up in this bed – which is kind of fun. oh, The basketball ornaments were the only red ornaments we could find after Christmas in the 90% off sales. We haven’t had any birds pecking on our tomatoes this year. I can’t say conclusively that it’s because of the ornaments. But we will be hanging them again next year. 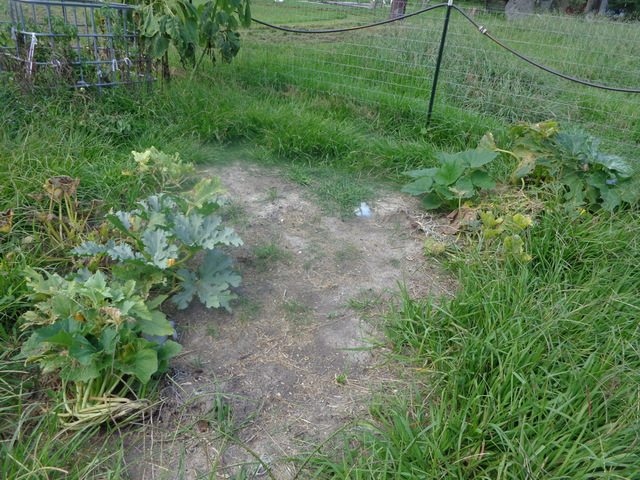 This is what is left of our sumer squash bed. A couple of these got pulled after this photo was taken so we only have 2 zuchhini plants left. Normally, we don’t have any that are producing in July. 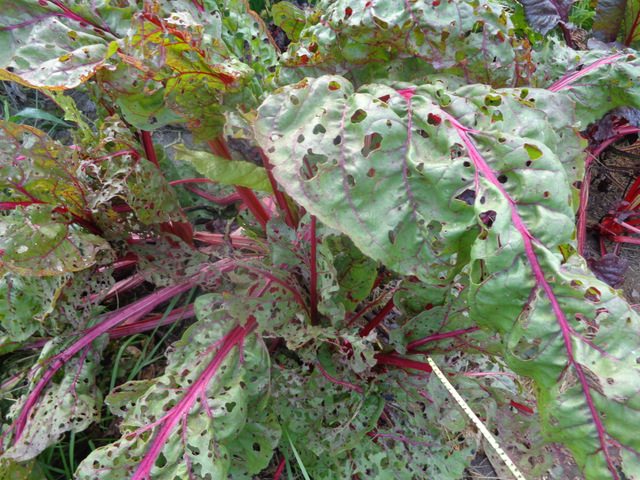 This Swiss chard has to go. My family is happy. I’ve been adding chard and kale to everything from lasagna to eggs to Spanish rice since November. 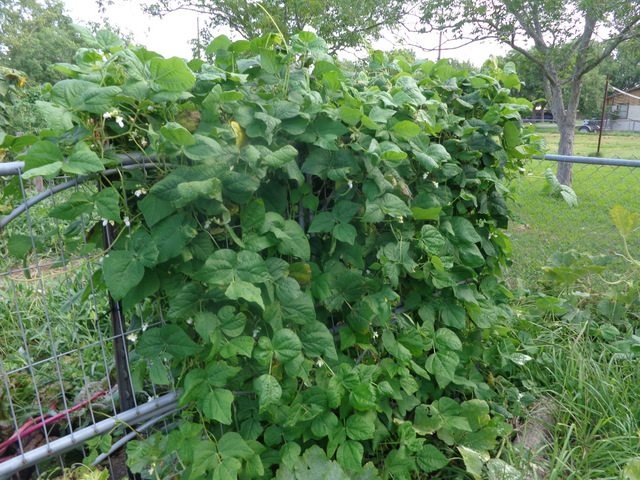 I have a love/hate relationship with these Kentucky Wonder pole beans. I love how prolific they are. They have seriously out performed the bush beans. We love the flavor. We hate the strings. Is there such a thing as stringless pole bean? If so, please tell me. 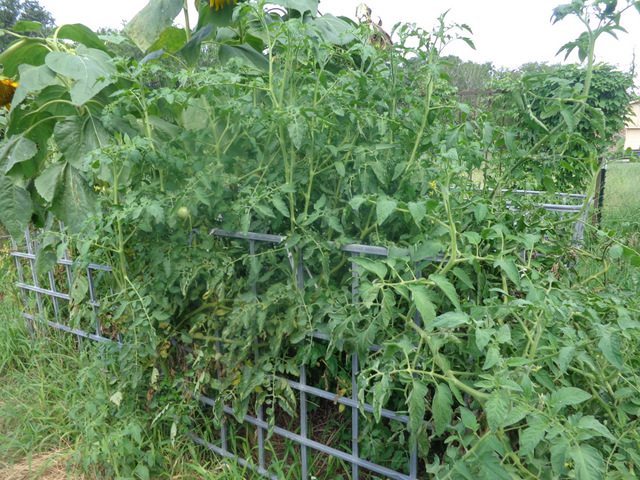 These are some heirloom tomatoes that we grew from seeds from Baker Creek. There are tomatoes, but they are not ripe. I’m ok with that. I love that the celebrities produce heavy for about a month and then stop. I use those to can with. But we like eating fresh tomatoes as long as possible so these will take us into the fall. The plants are just gorgeous. 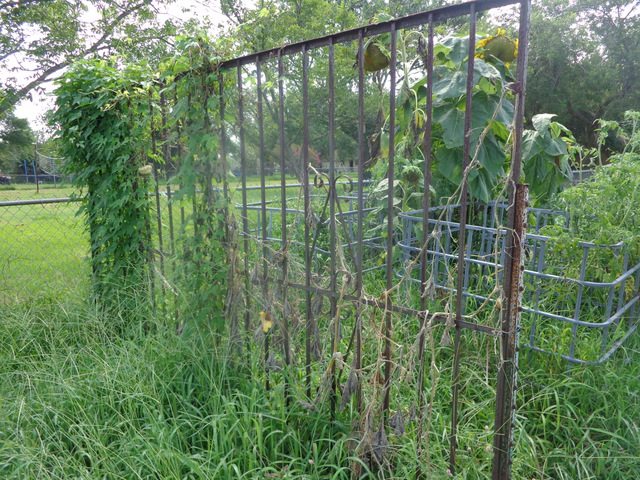 And this, this is what is left of my ornamental gourd trellis. The gourds have been picked, wiped with rubbing alcohol and stored. Those are morning glories on the far left. They will be pulled before they so to seed.

We have quite a few spots with giant sunflowers and they are slowly dropping their heads and going to seed. We have melons that are not ripe yet (this time last year we were eating a cantaloupe a day). We also have peppers and okra that we are still harvesting.

All in all, the July garden for zone 9 (at least in S. Texas) is about cleaning up and preparing for fall.

It seems like there is always more work to be done than there is time to do it, and I am retired! I've grown several varieties of stringless pole beans. Musica, Fortex and Gold Marie are my current favorites. That's odd that the kale didn't go to seed. It must have gotten confused!

Isn't that the truth! Thanks for the recommendations - the beans in your post look great!

LOVE how your garden is real and imperfect. It's GORGEOUS! :)

Thanks so much Christina! I think the best way to encourage gardeners is to be real. We've had our time of the garden being beautiful, now we're in a time of cleaning up. I think it's still beautiful - it's my happy place.

Wow, you've had quite a successful season! We grow a green bean called "Slendertte" that has no string and is tender and delicious. I believe the seed came from Jung. Good to know the ornaments may have helped with the bird problem! Enjoy your bounty!

Thanks for the suggestion. I'll have to look for that variety.

Here in Arizona we just planted a second summer garden when the rains started. I planted corn, squash, gourds, sunflowers, pole beans, watermelon, and tepary beans. I'm hoping it does better than my first summer garden. Tomatoes and beans were a success. Corn and squash were failures. I just learned that sweet potato leaves are edible so I have some growing. I'm a garden novice so I love seeing your successes and failures. It encourages me to keep on trying.

I'm glad it encourages you, Daizy. Also, I have a friend from Kenya and they eat the sweet potato leaves and they also eat squash/pumpkin leaves. You kind of peel it to get the prickly part off then cook it like spinach. Depending on where you are in Arizona you might be able to keep your sweet potato vines going year round. In Kenya, they just put some soil over the bends in the vine to plant it.