Home » sprucing up the hall
This post may contain affiliate links. If you click on a link and make a purchase I may receive a commission. Thank you for supporting this site. 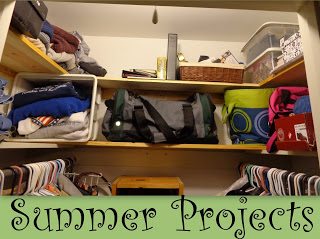 Ok, I know most people don’t give their hall much thought. But our house is very small, like 1400 sq ft small, and there’s 8 of us living it. I need to utilize every inch. So I have a bookshelf in in my hall along with maps and chalk and felt boards.

The problem is that the bookshelf was one that was in one of my boys rooms in a previous house and then out in the garage in another house. Let’s just say, that is was pretty homely looking. But it’s tall, like over 6′ tall and solid wood.

So I asked Carl to cut it in half. I know, it’s an unusual request, but I wanted a short long bookshelf in that space and I needed a place to hang up the beautiful memory quilt my sister made for me for Christmas. 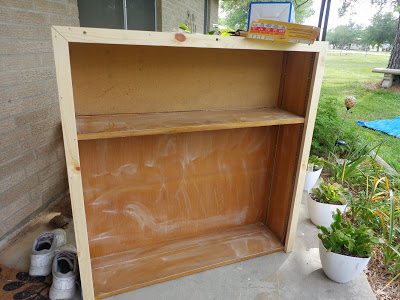 After cutting the book shelf in half, Carl flipped it over and used scrap wood to make a new top for each one. Then he added a front to them. 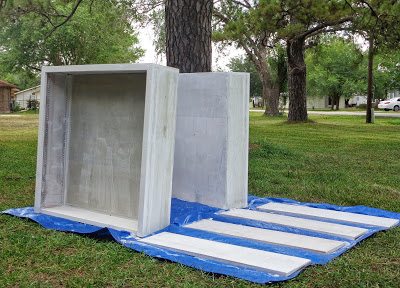 Then I painted it using chalk paint. I made the chalk paint with some white paint that I had gotten as a free sample and some plaster of paris. I used the recipe found on The 2 Seasons blog. I really liked the paint. It dries super fast which is important to me since I’m notorious for smudging wet paint. I used some Kilz first since the wood was so dark and there were some water stains on it.

So here it is in it’s new home. 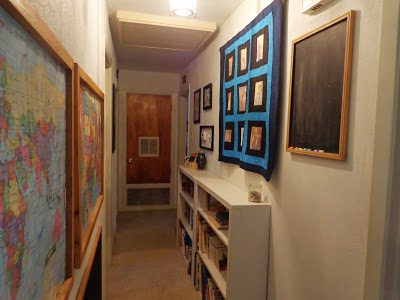 I love having a chalkboard that the little ones can color on. It’s kind of inconvenient but we just step over them. I also have a felt board and Esther has some felt cut outs that she plays with on the board. 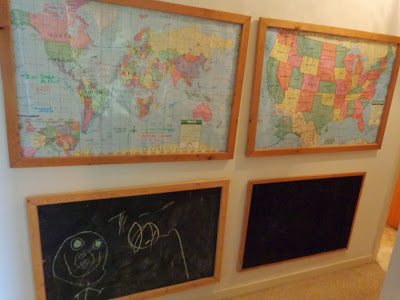 We keep our World map and our United States map in the hall. I also have the silhouettes that Josiah, Christian and Phoebe did in frames in the hall. 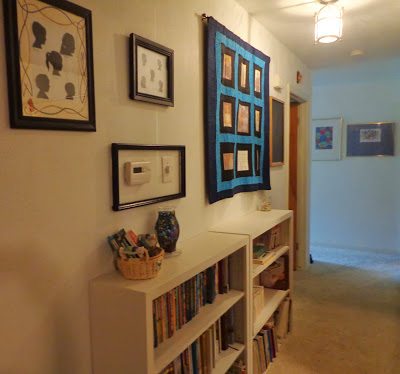 And just because if you frame something that’s utilitarian it makes it cute, I framed my a/c and attic fan controllers.

I still have a little arranging I want to do with the pictures. I have these great cherub things that Carl’s mom bought each of my kids when they were younger when she visited Rome. Right now I have 2 hanging over each bedroom door, but I think I’d like to put them all together on a plaque or shadow box and hang it with the silhouettes.

What projects are you working on?