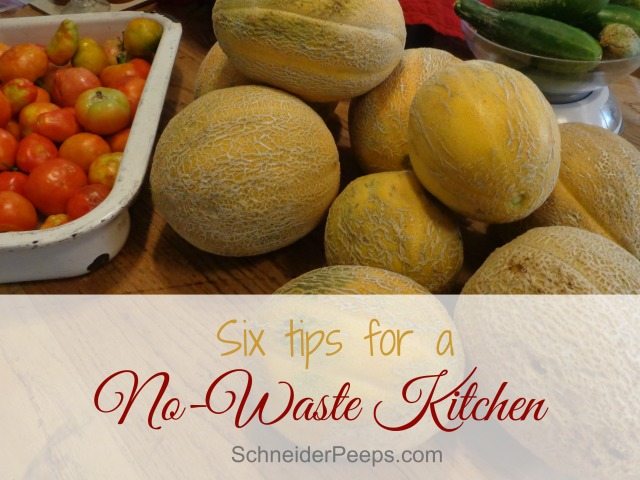 Because of having several family celebrations recently, I’ve become very aware of our grocery budget. And Carl has become very aware of how often the “chicken bucket” has been full lately. It certainly isn’t out of control but it could use a little more planning, executing and attention.

During our season of unemployment I was keenly aware of what was in our pantry, refrigerator and freezer. I sought to run a “No Waste Kitchen” and did pretty good. I’ve gotten lax over the last year or so but I’m bringing this philosophy back.

For me, a “No Waste Kitchen” means that no edible food gets thrown out – or given to the hens or dog. It means no item is too small to matter. It also means saving money. We’ve lived this way before, we can do it again.

How to have a No Waste Kitchen

1. Be intentional about what we buy.

There are some things that I’ve bought in the past because they were on sale (or I had a coupon) and then we wind up with things we don’t really eat. I’ve gotten much better at this and need to remember that for the most part if we won’t eat it, I don’t need to buy it. The exception to this is when I’m introducing a new healthy food to my family. It takes trying it a few different ways before I decide it’s not worth buying.

2. Have a plan for the harvest.

This time of year is hard for me. The green beans and squash are just beginning to produce but not really enough for a meal. So we’ve been having a lot of “mixed” vegetables. Basically whatever is ready to be picked gets put in a skillet and saute’d.

In a few weeks we’ll have more than we need for a meal but not quite enough to can. I know that will happen and I can prepare for it. I’ll be content with grating and freezing the extra squash or two each night for a while instead of trying to save them to fill the dehydrator. I’ll also freeze the tomatoes and then just thaw them out when I have enough to can. I try to make the most of our harvest buy using a combination of freezing, dehydrating and canning.

I really hate fights at the table so I learned a long time ago to just put a serve smaller portions. Of course, all my big kids eat just fine, but if we’re not careful we’ll give Esther too much and she can’t (won’t) eat it all. I know I could put the plate in the refrigerator and heat it up the next day and that does happen sometimes. But it’s really just easier to serve a smaller portion. 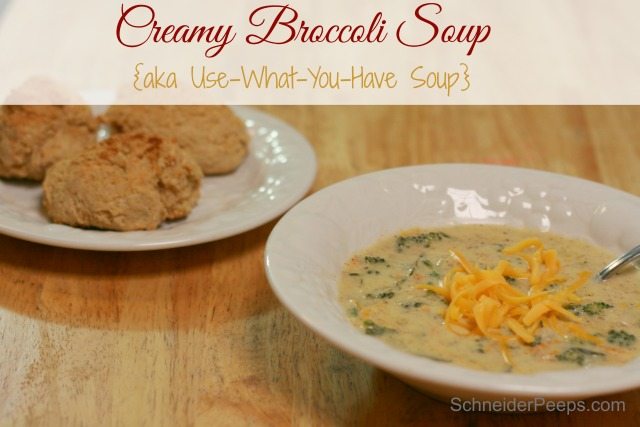 Plan at least one lunch or dinner each week to intentionally clean out the refrigerator and freezer of the leftovers. We call it “Buffet Night”. Sometimes after large family gatherings we have to have two or three of these.

Remake the leftovers into something else. For instance, if I have broccoli left over from dinner, I can use it to make a little cream of broccoli soup for lunch the next day. Or if we have an extra baked potato from dinner, we’ll slice it and cook it with eggs the next morning.

If there’s quite a bit of leftovers, I can freeze them in small meal size containers as “frozen dinners.”

5. Look out for the little stuff.

This is where the rubber meets the road. Sometimes there really is too small an amount to save (or so we think). Save it anyway. I have a container in my freezer that is just for tomato products. 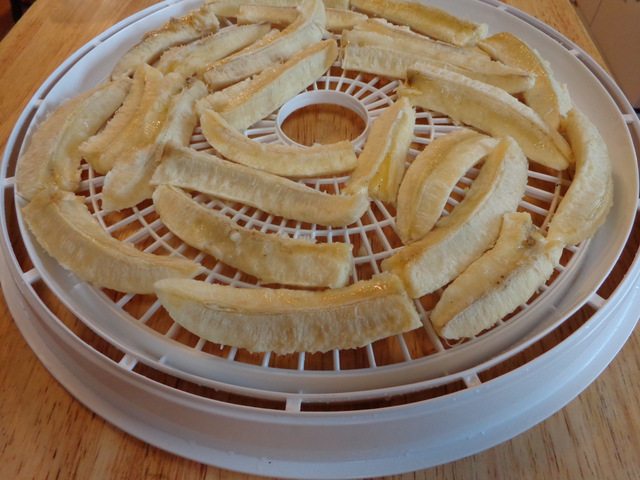 6. Freeze things before they spoil.

If I notice that the bananas are not getting eaten very quickly and they are past their prime, I put them in the freezer until I have time to make banana bread or dehydrate them and make banana jerky. If something has been in the refrigerator for a couple of days and I’m not sure if it will make it until “Buffet Night”, I put it in the freezer. I just need to remember to scour the freezer, also.

Not wasting food is definitely a first world problem, for many nations in the world there isn’t enough food to ever have enough to waste. But we live in a culture of abundance, in fact many of us don’t even think about the food we put in the scrap bucket. But according to the folks at Green is Universal the average person (not family) wastes 244 pounds of food each year. And the average family of four spends over

Now it’s your turn, what are your tips for having a no waste kitchen? 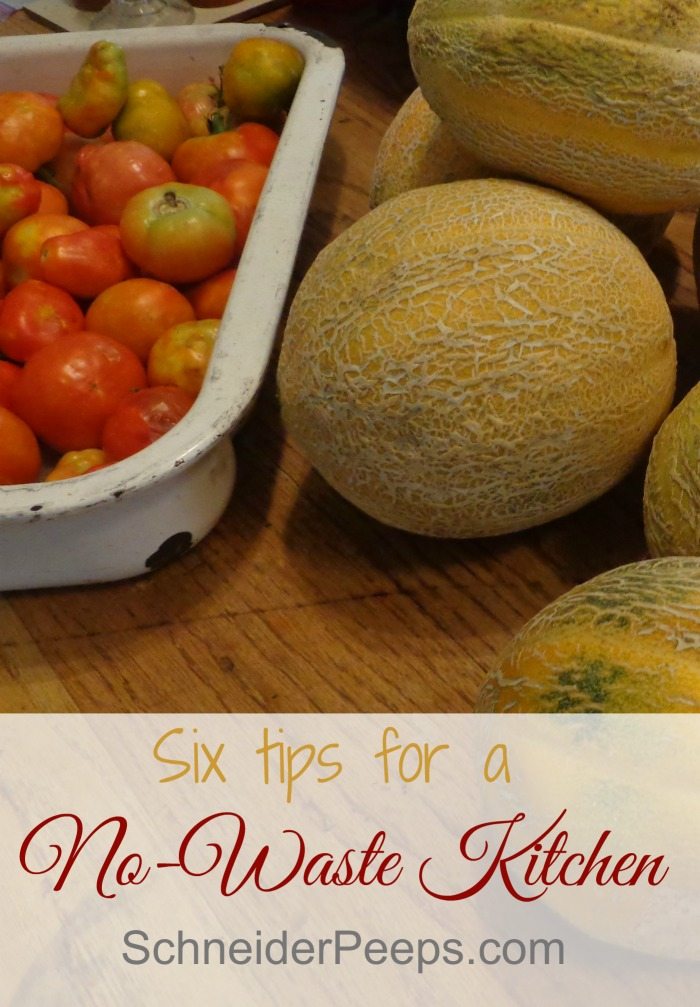 Now it’s your turn, what are your tips for having a no waste kitchen?

This was an excellent read. Thanks so much

I dry all types of bread for bread crumbs, all bird carcasses, beef bones and lamb bones get made into stock or soup, left over fruit gets frozen for smoothies. I like the idea of putting the leftover tomato sauce etc in for spaghetti sauce. I can lots of tomato sauce, pizza sauce and spaghetti sauce every fall, so that will mean none of those will be wasted either!

Such great ideas! Thanks for sharing, Marie.

These have been long-standing practices at my house. Biscuits and bread ends are frozen for bread pudding, Cornbread is saved for dressing. I buy the largest size container of green chillies,diced garlic,and things like that and freeze them in ice cube trays. Then just toss a cube in when needed. The same with evaporated milk,cream of chicken soup,etc. Leftover veggies and bits of meat make wonderful,warming soups and stews. Use your imagination!

Thanks for sharing your tips!

when I make smoothies and there is just a little bit left over I freeze it in an ice cube tray, Istore the frozen cubes in a plastic bag and when there is enough I put them in the blender with a half cup of liquid and blend. Free smoothie!

What a great idea! Thanks for sharing.

This is great, Angi! My husband and I have recently been seeking to cut back on the waste from our kitchen. It's so easy to let things go, but it makes a difference when you don't! We do a fair job at managing leftovers, but i definitely need to work on the little stuff more. Thanks for the tips!

Hi Hannah, thanks for stopping by. It's the little stuff that gets me too!