Home » ::meet Rooster Cogburn::
This post may contain affiliate links. If you click on a link and make a purchase I may receive a commission. Thank you for supporting this site. 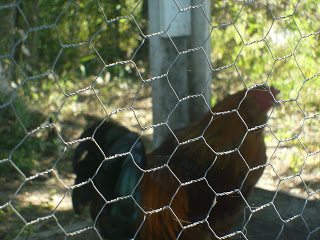 Shhhh, don’t tell him he’s not John Wayne, because he thinks he is!

We decided to add chickens to our little homestead next spring. Not only for eggs for us but we thought it would be a great opportunity for Phoebe and Benjamin to earn a little extra money selling eggs. Several ladies from church have said that they would buy from them and even the lady at the feed store told them to bring them in and “they” would also buy some. Pretty cool, they have excitement before they even have the product!

So, why do we have a rooster, well, let’s just say that after 19 years of marriage Carl and I are still very different in some ways. I’m pretty laid back in alot of ways, spilled milk?…well, it’s just spilled milk; I’m more of a “done” is better than “perfect” kind of gal. However, when I or we decide to learn something new, I’m all about the books. So I thought we’d head on over to the library and get some books about raising chickens, maybe do a little online research, then order a couple of the books I liked most as reference. After all, we have time, we won’t be getting the chicks until spring. (In these matters, Carl’s more of “let’s just jump in and learn as we go.) We decided on a great spot out in the back where they can roam after we get some fencing wire up, we looked at coop plans and I was reading The Joy of Keeping Chickens. All was going according to plan. Then a friend was upgrading his coop and offered us his smaller one, and that started the ball really rolling. After finding out that we had a small coop, a guy from work brought Carl a rooster to start us off! Can you believe that rooster hasn’t given us not one egg!

Actually, we really like Cogburn, his presence lit a fire under the children to enclose that area, he’s not mean…we’ll see what happens when the hens come, and he’s beautiful.

Next on the list for the homestead, Gabriel is campaigning for bees! We have a friend who said he would give Gabriel a hive, if it was okay with with. Now, just to find some books…