You might remember that a few weeks ago I mentioned that a friend from church brought over some eggs for out incubator.
Well, Friday night we returned home from a play and found this little guy walking around in the incubator (Esther calls it the dehydrator…) 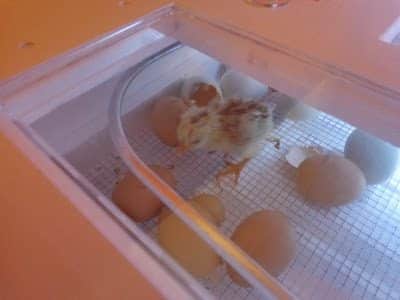 Three babies hatched while we were out. Another 2 eggs were cracked so we did what any other person would do, we stayed up until 1am watching them hatch. 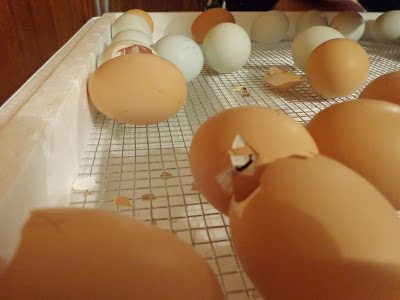 It was a pretty cool experience. We talked about being “chick midwives”, how they look like velosoraptures when they first come out of the shells and quite a bit of other silliness while we watched and waited. 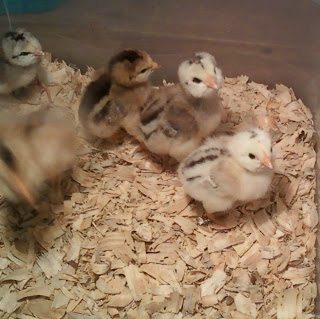 Here they are today…fluffy and super cute. The daddy is an Americana and some of the mamas are also Americanas and some are Rhode Island Reds. It will be fun to see what they all look like when they grow up.

Let me just say that it wasn’t all fun and games and happy science experiment. We had several not make it. Some didn’t even hatch, a few tried really hard to hatch and even with help wound up dying, and three have some leg/feet issues. 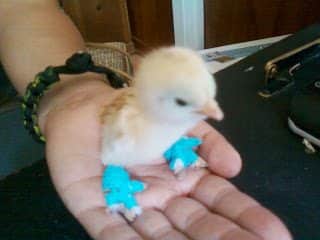 After some research we realized that they have spraddled legs and curled toes. My friend Jennifer at Black Fox Homestead suggested I read this post by The Chicken Chick. I did and Benjamin and I set to work. First of all, if you do this you  really need VetRap, not the wrap they sell in the first aid aisle at the grocery store. We make braces and “shoes” for the three chickens. It took us about an hour and a half to get it all done. We’re hoping it works. Two seem to be responding well, one has just decided to lay on her tummy with her legs kicked back. I’m sure that’s not good.

Have you ever hatched eggs? Was it what you expected?

How exciting! I'm sure having some of them not making was difficult, but this is still such a blessing. I hope the spraddle leg is fixed from your treatment. Maybe we'll hatch some of our own someday.

Thanks. It is a blessing and we'll probably do it again. But we'll be better prepared next time. Kathi at Oak Hill Homestead offered some advice about putting a damp sponge in the incubator the last few days. We'll definitely do that next time.

I hope the chick shoes help. Hatching chicks can be addictive! I had to actually pack up the incubator and put it away - lol.Kathi at Oak-Hill-Homestead.blogspot.com

Thanks, Kathi. It might be a while before I'm brave enough to get it out again. There's some parts of this homesteading life that are really, really hard for me. Maybe next time we'll have better luck.

Good luck with the rest! We're enjoying our RIR gals (born at a hatchery).

This post makes me sad and happy - I ahte that so many were lost in the process but oh my are the chicks in the pictures cute!

I feel the same way. We've had so much reality in this experiment. Thanks for visiting.