Home » Kale and Bacon Salad
This post may contain affiliate links. If you click on a link and make a purchase I may receive a commission. Thank you for supporting this site.

A few weeks ago at the library I found the book Ten Dollar Dinners by Melissa d’Arabian of the Food Network’s Ten Dollar Dinners fame. Since I’ve had summer cold this past week, I’ve spent quite a bit of time in bed and laying around on the couch looking at books. I really enjoyed Melissa’s book.

The photos were amazing and there was just enough story to go along with each recipe. Now, not every recipe had a photo but the ones that did looked great. 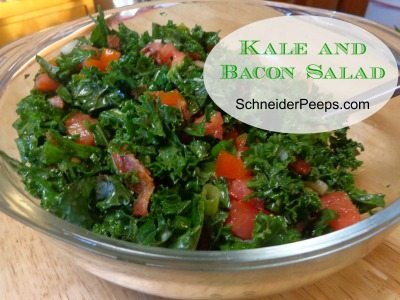 As you know, we’ve had quite a run on kale around here this year. So when I saw the Kale and Bacon Salad I knew I wanted to make it. I also knew that probably only half of my family would eat it. But that’s ok, the others can have boring tossed salad.

I made a few changes because that’s just what I do. Also, I wanted to use what I had. Everything  but the bacon and the orange juice is from our garden and orchard. That makes me happy.

Fry the bacon until crispy. Set aside.
Put lemon and orange juice in a small bowl with salt. In larger bowl put chopped kale. Drizzle the juice over the kale and using your hands rub it into the kale. When all the kale is coated add onions and tomatoes to the bowl. Add bacon and (here’s the good part) the bacon grease. Mix well.

In the original recipe, Melissa uses scallions and olive oil.