Have I mentioned that we have the most amazing homeschool drama club? I’m sure I have but I wanted to mention it again. We’ve been a part of it for the last 4 years and I have seen my own children (and others) grow so incredibly much. It’s fun to see kids go from barely being able to make eye contact at the beginning of the year to standing in front of a 100 people with the lights on them and act and project their voices.

This week has been all about the jr high group. They had rehearsal both Monday and Tuesday afternoon and have performances Thursday and Friday nights. Both Gabriel and Phoebe are in the play, “Employees Must Wash Hands Before… Murder.” It’s a spoof on restaurants and the health department, complete with a fry cook who thinks he’s Yoda, a counter girl with deep seeded emotional issues, the attractive girl, a yellow and pink talking bird, a 1980’s restaurant owner and the Fairy of Copyright Infringement. Very, very funny.

Here’s some pics from their dress rehearsal. 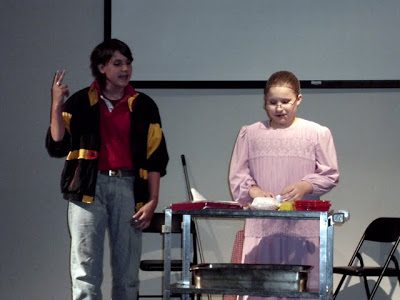 Here’s Gabriel as the 1980’s restaurant owner and Phoebe, his mother. It was funny seeing them act together…her being so sweet and him, well..not being so sweet. 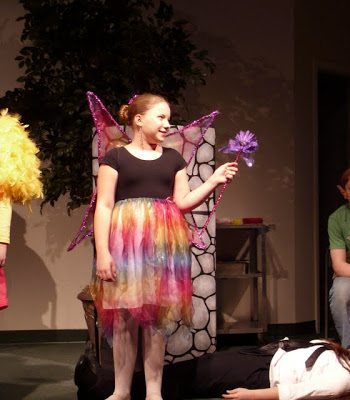 Phoebe was also the Fairy of Copyright Infringement with her wand of Punitive Lawsuits.

It’s been a lot of work and we still have the high school performances in early May, but, goodness, it is so worth it to see the kids perform so very well.

Sounds like a lot of fun. I don't think I would ever eat at a restaurant named like that. Eww!

Yea, me either. It was so very funny when they put the sign up.

I bet it was a great performance. And yes, we do have the best drama club EVER!! I miss it very much! Break a leg!!! Christy

We miss you guys, too, Christy! It was a crazy week but so very worth it.