I’ve been able to spend some extra time in the kitchen this week and here’s some of what I’ve done…. 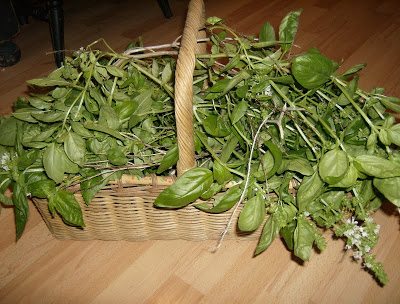 We pulled up the basil that is flowering for the second time and I decided to just go ahead and make some frugal pesto even though I’ve heard that basil goes bitter after flowering. Let me just say that if you put enough garlic and Parmesan cheese in it there’s no noticeable bitterness. We made about a gallon. Hopefully enough to last until next summer. 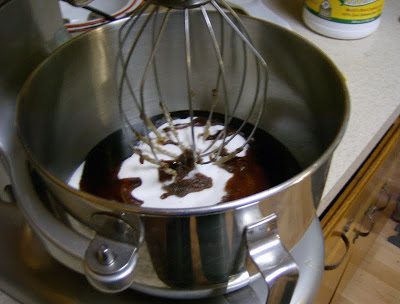 Did you know you can make your own brown sugar? It’s just a cup of granulated sugar and a tablespoon of molasses. I made about 6 cups to bake with and use in coffee…mmmmm. It’s probably not much cheaper than buying it but at least I know that there’s real molasses in it. I’m not saying it’s healthy, just better. 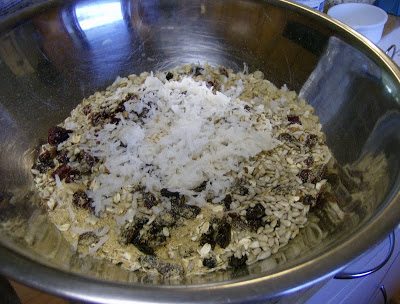 I made 5, yes 5, batches of Chewy No Bake Granola Bars. I cut them up and freeze them for snacks and for Carl to pack in his lunch. I substitute ground flax for the wheat bran and I don’t put chocolate chips in every batch.

I also cooked up a batch of chickpeas and made some hummus. I used this recipe as the base but I left out the onion powder and added 2 tsp. of cumin, 1 tsp. of chili powder and a heaping tbsp of tahini. I also drizzled in some olive oil. It was so very good. (no picture because my camera batteries died).

I’m really needing to make some waffles – maybe I can do that for lunch?

What’s been happening in your kitchen lately?

I never thought to make my own brown sugar, but I imagine it would be amazing with a vanilla bean pod stored in the container too! :)

Thank you for linking up with the Clever Chicks this week; I hope you’ll join us again!

Hi....wow...I did not realize either that I could make my own brown sugar. thank you for sharing...I will be doing this in the future! This is so great that so many of us share what we know!

Jamie at Prepared to Eat

Wow, I never really thought about making my own brown sugar. What else do you use molasses in? My mom offered me some over the weekend, but I wasn't sure what I would do with it.

I also use it to sweeten hot cereals like oatmeal, malt o meal and cream of wheat.

I guess I am just plain lazy when it comes to making brown sugar. I just use the amount of brown sugar called for in the recipe and then add some blackstrap molasses to that. I never measure but probably go a bit heavy on the molasses since I love the stuff and nobody ever complains about it.

Thanks, Tracy. I do that, too. But I also like to have some already made on hand for coffee.

I make my own brown sugar too. I use blackstrap so at least there's slightly more iron in it than storebought.