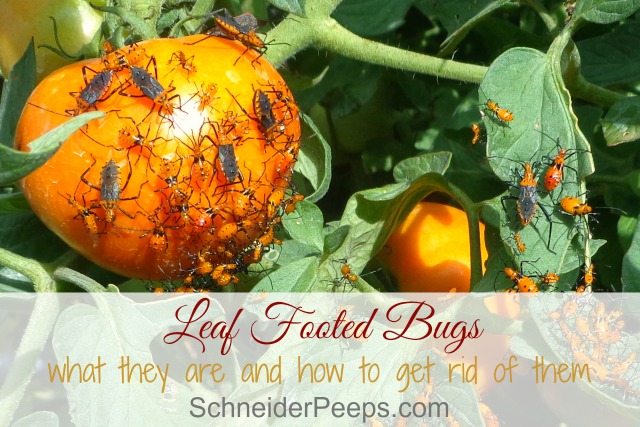 We planted several different varieties of tomatoes this year. We planted Rutgers, Romas, Purple Cherokee, Lemon Boy, Yellow Pear and Yellow Cherry tomatoes. They have all done well and after the season is over I’ll share my thoughts on each variety in the season wrap up. 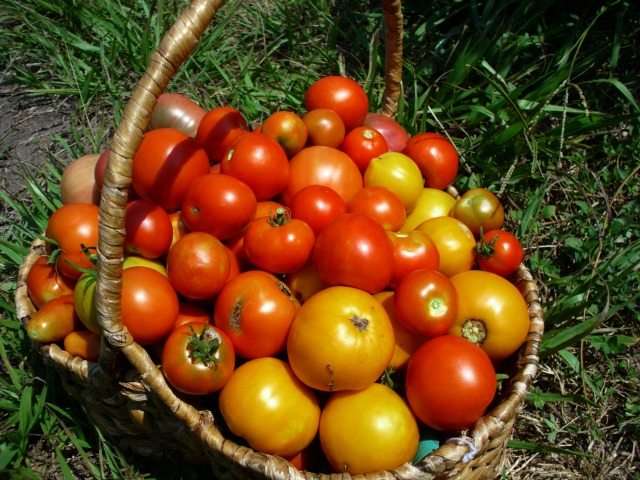 But last week I noticed some Leaf footed Bugs on them… 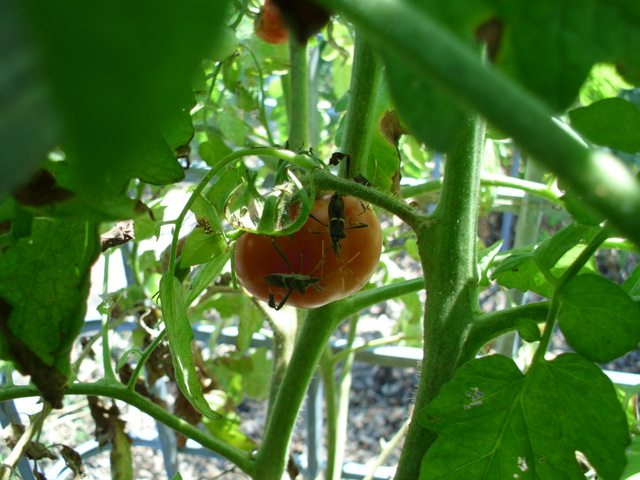 Here’s the adults. They’re kind of big and ugly looking. They’re related to the stink bug and they suck the juices out of the tomatoes. 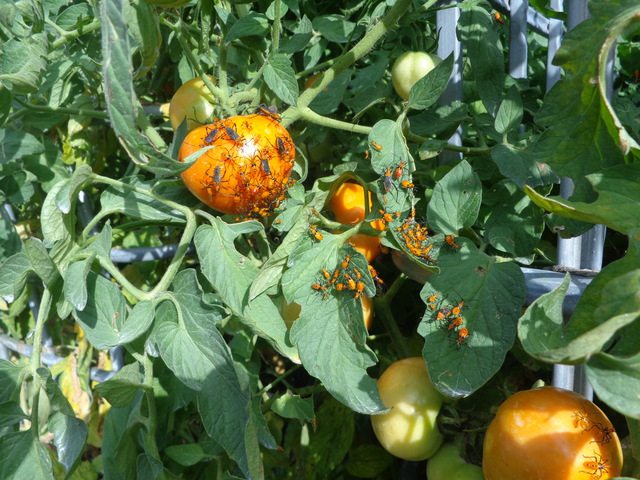 Here’s some babies and even though they are smaller they are no less destructive than the adults. 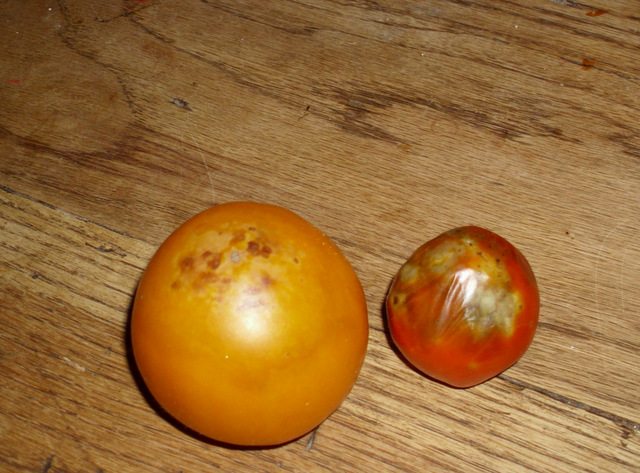 Here’s the damage they do. There will be soft watery spots on the tomato and then bacteria can start growing in it…yuck!
Each day while we’re out in the garden we’re looking for these guys and squashing them because that is our favorite pest control method. Now they are related to the stink bug…you might want to consider that before you squash yours. Other than spraying with something that will kill all bugs (including bees) there’s not much else to do at this point.
But here’s something interesting I’ve observed…
It’ll be interesting when the season is over to figure out an average of how many pounds of fruit each tomato plant produced and to see what varieties did the best.

“Leaf footed bug” refers to a wide variety of bugs that have a widened lower leg. Here are some great photos and classifications from BugGuide. Not only do they like tomatoes, they also like pecans, prickly pear, peaches and many other tender young plants and beans. They insert their sharp mouth into the fruit and suck the juices out. They leave some saliva in the fruit which causes it to stop growing and rot.
The Life Cycle of Leaffooted Bugs

Have you ever had these bugs? Is there another organic way of getting rid of them? 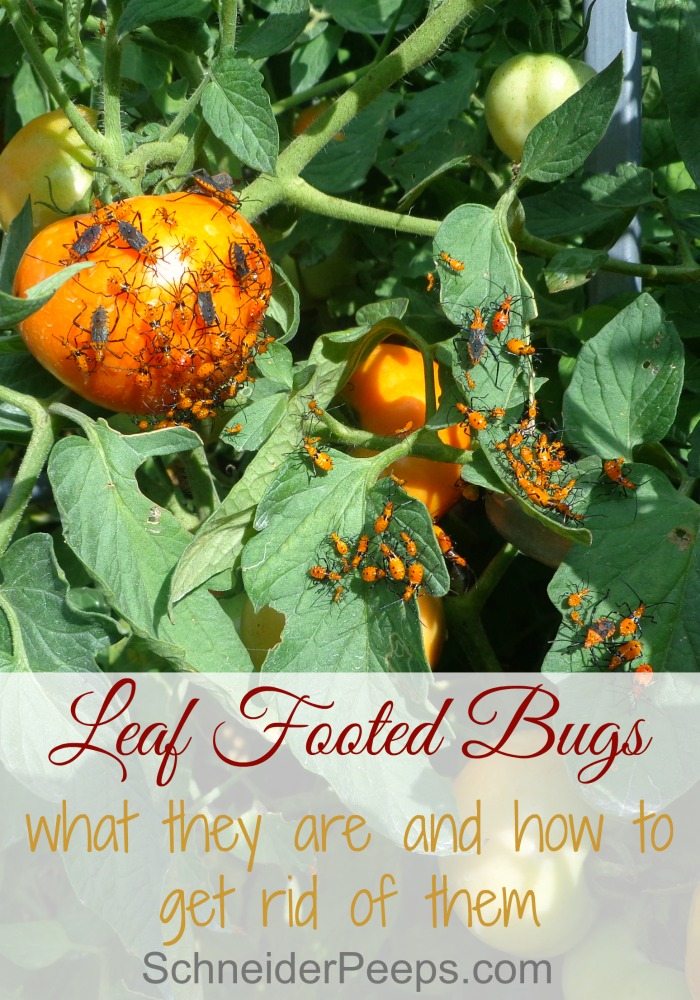 The homemade pest spray I have had success with is 1Tbls liquid dish soap (Dawn) in a spray bottle filled with water. This immobilizes and kills the soft body nymphs and. An be washed off your plants,

Thanks for sharing, Terry!

I have had good luck breaking off small willow limbs and sticking them through the tops of my tomato cages. The strong smell seems to fool the bugs and they go elsewhere. It also gives my tomatoes a bit of shade until the leaves get dry. The strong willow smell stays even after the leaves dry and begin to fall off. By then the bugs are usually gone anyway.

Thanks for the tip Sherry! I will have to try that this year.

Hi Angi-- I know this has been going for several years but I have to tell you about the cleanest, easiest, most successful and least toxic way to control leaffooted bugs. They don't swim well, so drown them! Use a container with a wide mouth (like empty Costco 2.5 lb mixed nut plastic containers) . Fill part way with sudsy water (a bit of dishwashing detergent does the trick). Hold it under the bugs, tap the leaf or tomato or whatever they are on, and knock them into the water. You can even dunk a whole group of tiny nymphs (on a tomato like in your photo, for example) into the water! For adults, hold the container just below and in front of them; 99% of the time they will jump right into the water. The suds aren't mandatory, but it takes care of the bugs more quickly. This method also works for other stinkbugs. Happy hunting!

Hi Elizabeth, thanks so much for the tip! I will definitely be trying it next year when these little guys come back. I think with this method I can even get my kids to help.

Yuck Angie! That looks really bad. Reminds me of the squash bugs on my zucchini last year. They were so destructive. I had stink bugs on my tomatoes, but not too terribly bad. I hope to be on top of the bugs this year. Last year I also had a large amount of bean beetles, but I still got a really good harvest from my beans considering I only had one row. I was pleased.