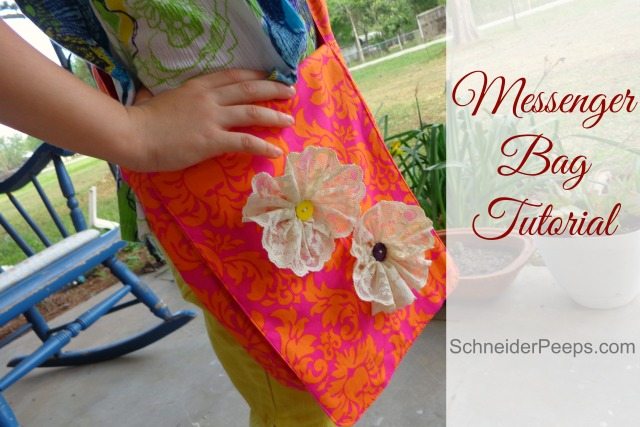 It’s been a while – a long while – since I’ve done fun sewing. Not to say that sewing drama costumes and mending ballet performance costumes isn’t fun, it’s just not that same as spending some time doing a quick project that brings happiness to your daughters.

I recently recently purchased some fun fabric thinking it would be fun to make me a new bag for me for running around town and a bag for Phoebe and a smaller one for Esther. Well, who knew a 14yr old girl would *need* two bags, not one. So as it stands, Phoebe gets two bags and Esther gets one.

The tutorial photos are for the smaller messenger bag I made Esther, but I’ll also give the measurements for the pattern pieces for the larger bag that Phoebe made.

First of all, you will need about a yard of fabric (about 2 yards for the larger one), thread, scissors, pins and a sewing machine. Oh, and if you want to embellish the front, you can use buttons, lace or anything else that strikes your fancy.

Ok, here we go (by the way, I take lots of pictures for the tutorials I do, just in case someone is new to sewing) … 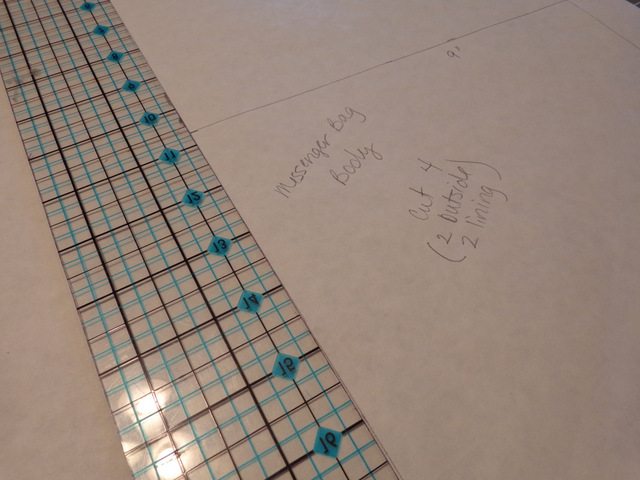 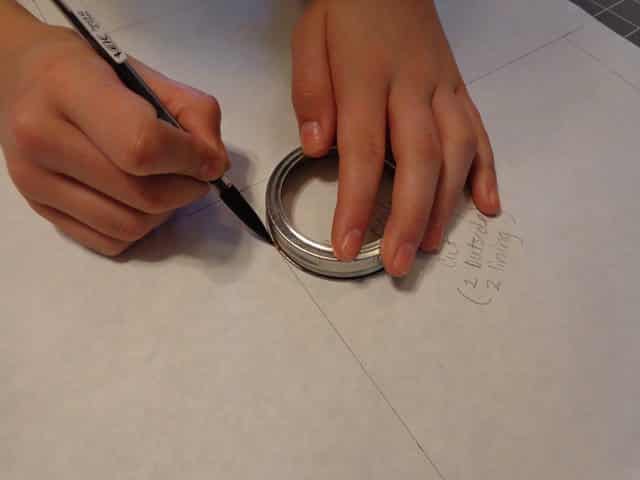 We use a super fancy canning lid band to round out one corner on the flap piece and two corners on the body piece. 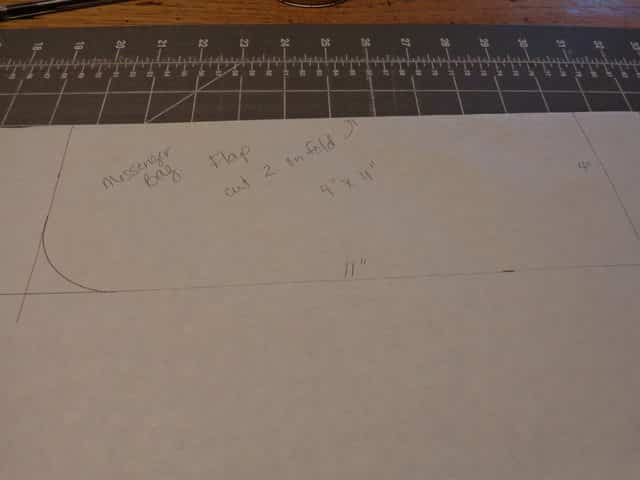 The body piece is on the right, see how the two bottom corners are rounded (the flap piece in this photo is sideways – it’s rounded on the bottom, too). Now, cut out 2 flap pieces on the fold. When you buy your fabric it is folded in half lengthwise – that’s “the fold”. Line up the not curved long side of the flap piece on that fold and pin it. Next you need to cut out four pieces fo the body piece. If you are using a patterned fabric, make sure that you are going to like how the flap will look against the body. Meaning, if you have stripes don’t cut one piece with them going horizontal and one piece with them going vertical. For the strap, you need to cut 1 peice that is 2.25″ X 31″ (for large bag 3″X60″) go ahead and measure over your shoulder to see how long this needs to be for you (or your child). You can always shorten it but it’s hard to make it longer once it’s sewn. Lastly, you need to cut 2 strips that are 2.25″X28″ (for large bag 3″X44″). 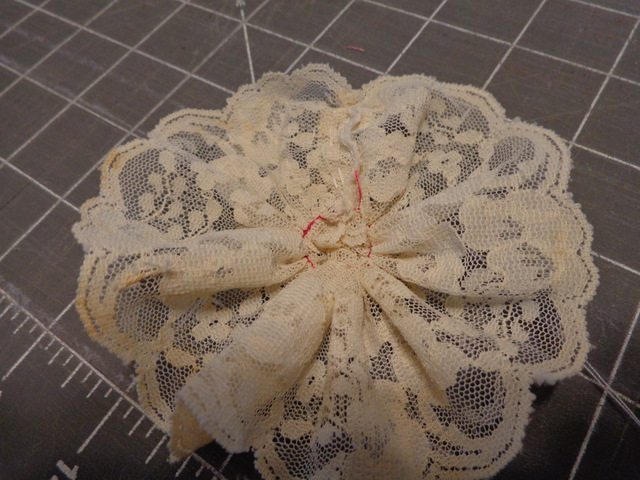 If you want to embellish the front, now it the time. Phoebe made these fun flowers for Esther’s bag from some lace that her grandma gave her – I’m sure it’s over 30 yrs old. Just run one side of the lace through your machine on the longest stitch lenght without backstitching (this is a basting stitch). Then pull one string until it starts gathering. Once it’s gathered all the way, it will look like a flower. Phoebe stitched the ends together by hand. Then she hand sewed them onto the front flap with a button in the middle. 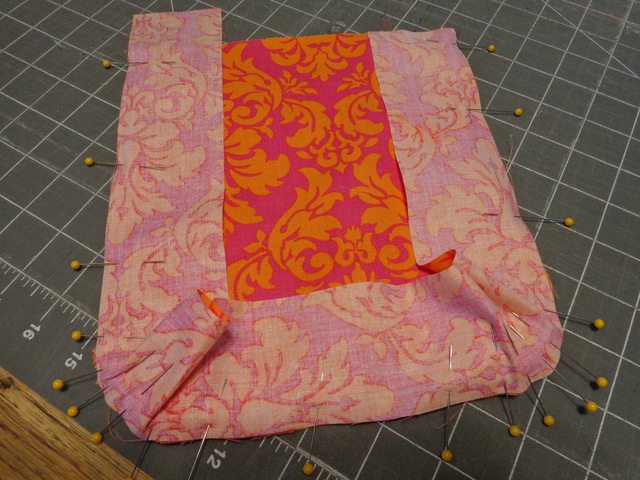 Now, we’re going to make the body of the bag. Take one of your shorter strips and pin it to one piece of the body – with right sides together. See how I just kind of made it go around the curve? Also, don’t worry if you have a little of the side that is longer than the body piece like I do on the left, we’ll just cut it off. 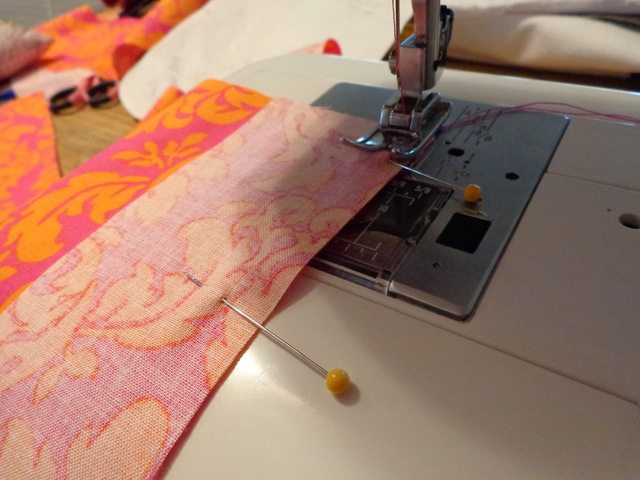 Next, stitch it together using a 1/4″ seam allowance. I just use the edge of my presser foot as a guide. 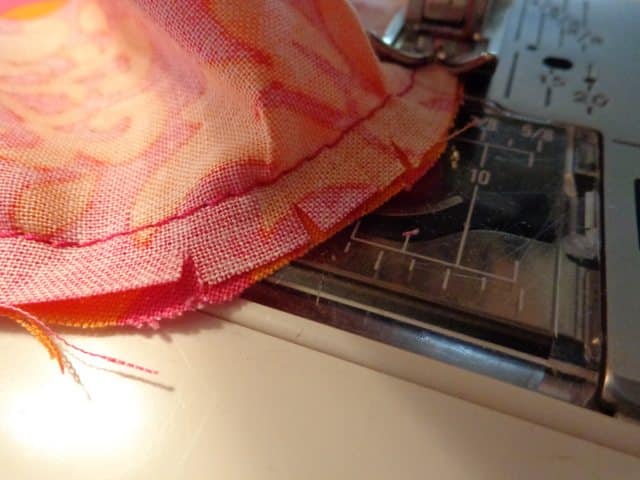 Once you’ve stitched the side, go ahead and zig zag the edges. This picture isn’t the greatest, but you want the needle to actually go off the edge of the fabric on the right side. Also if your curves aren’t laying flat go ahead and clip a few times right in the seam allowance like I did above. 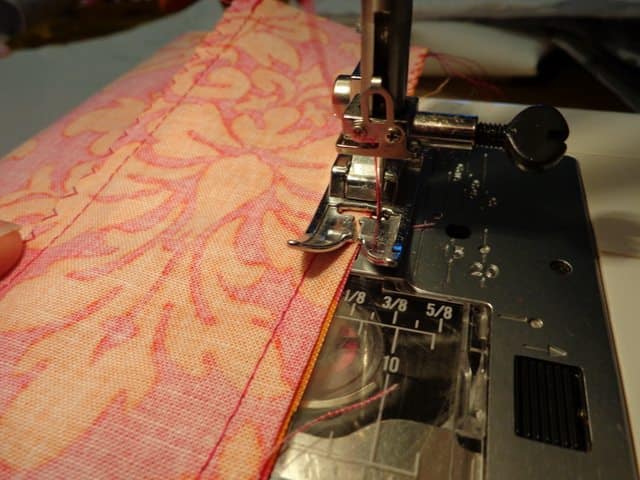 ok, here’s the picture of the zig zag.

Next, you’re going to pin another body piece to these sides. Stitch all around and then zig zag. Now you have the body done!

Now, we’ll do the lining… 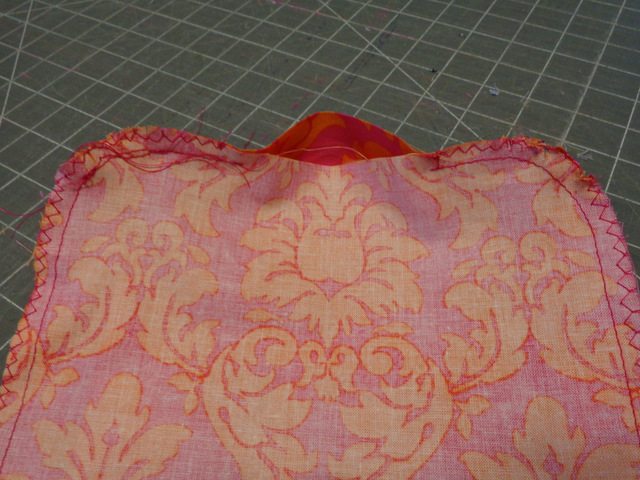 The lining is the other 2 body pieces and the other short strip. But it together just like you did the body with one exception. When you sew on the second body piece, leave a 3-4 inch hole at the bottom. Just like in the picture above. That’s it for the lining. 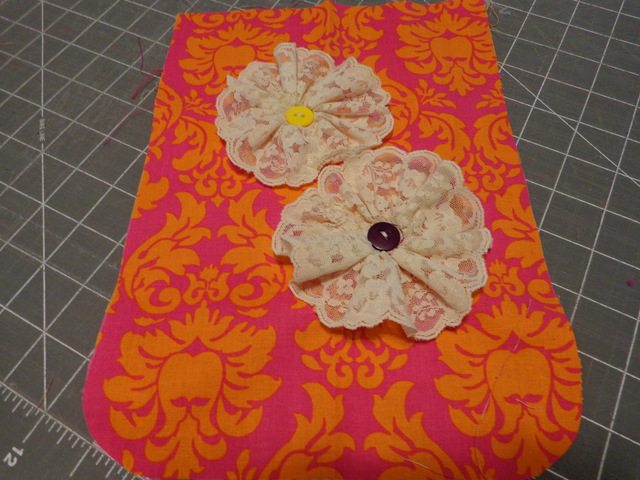 Next up is the flap. Embellish the flap if you want. Lay the embellished flap piece up and then put the other piece right side down on top of it. Pin on three sides – leave the top open. 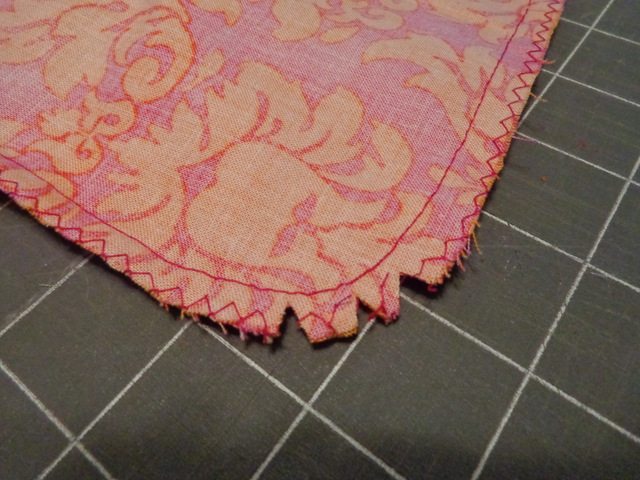 Stitch around the three sides. Zig Zag and then I like to cut a few little notches out of the corners so that they will lay nicely. 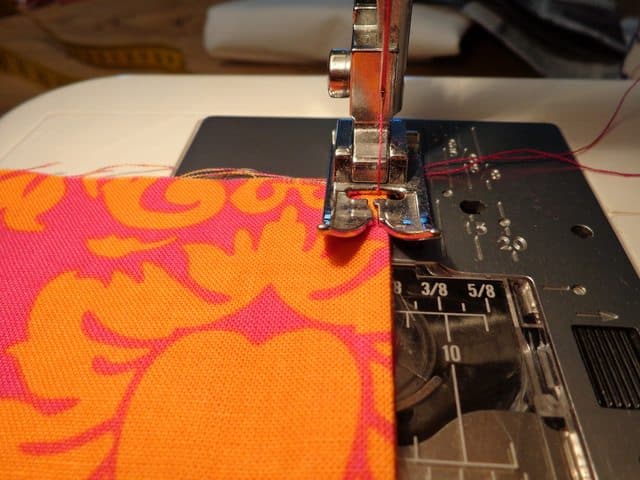 Turn your flap right side out. Iron – if you want to, I like to as it makes for a nicer product. Then you’re going to topstitch around the three sides of the flap. See how I’ve lined up the fabric so that the needle is super close to the edge? That’s all you do and stitch on the three sides. Again, you don’t have to do this step, but it makes for a really nice end product. 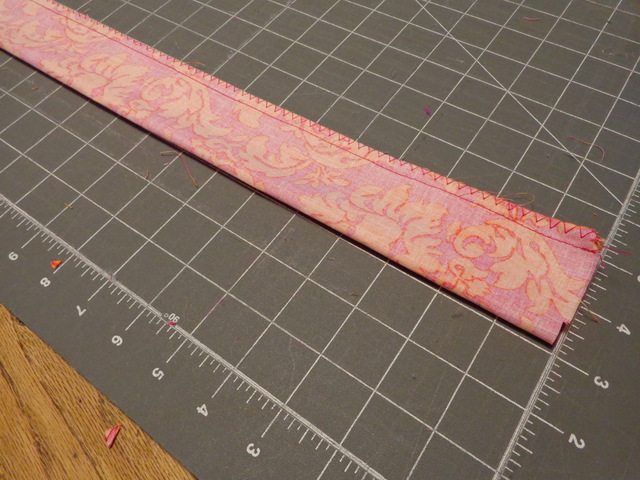 Now take your 2 long strips and sew them together with right sides together. You’ll have two seams – when I did Esther’s I made an extra wide strip and then folded it legthwise so mine will look a little different but you can figure it out. Then zig zag both sides. Now you need to turn the tube right side out. Just flip the sides down and start pulling the fabric through. 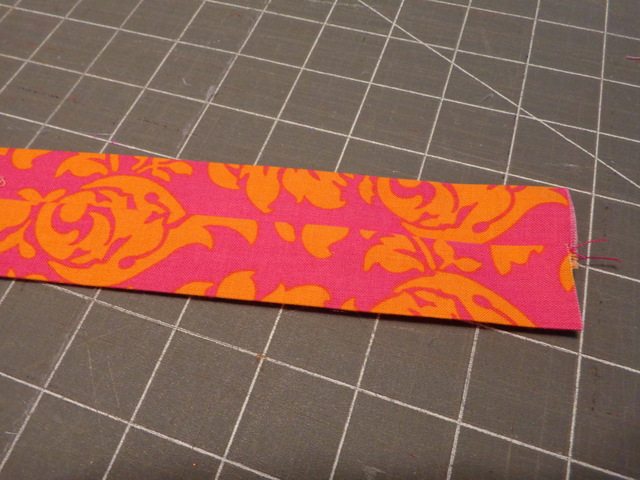 Iron your strap. I did Eshters with the seam down the center but you have two seams so just iron them on the sides. 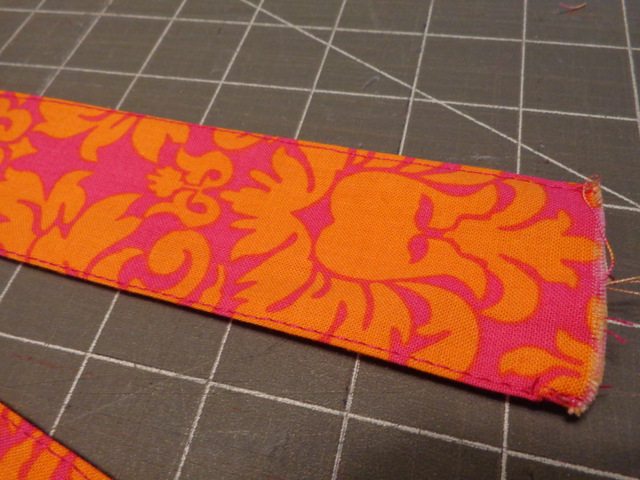 Topstitch down each side. Your strap is completed. 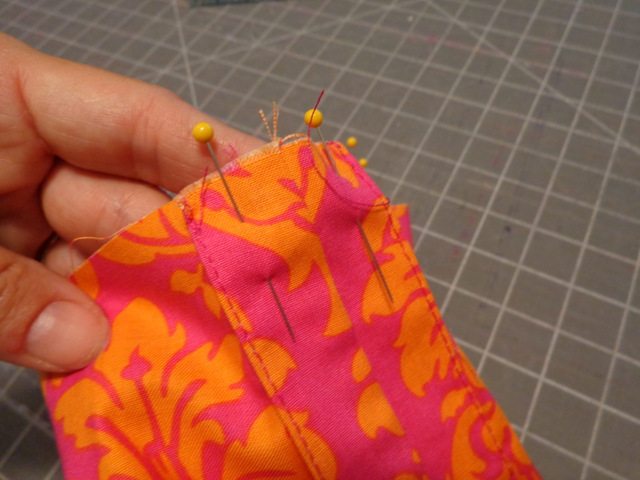 Take your body part of the bag (not the lining) and turn it right side out. Pin one end of your strap to the side of your bag, matching raw edges. Now pin the other end to the other side making sure that the strap is not twisted. Stitch both ends on using a 1/4″ seam. 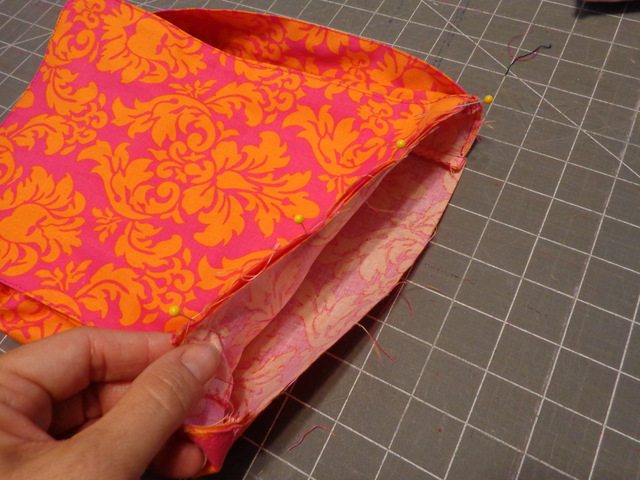 Now, line up your flap with the embellished side down and pin the raw edges to the raw edges on the body of the bag. Just like in the photo. Stitch it on with a 1/4″ seam allowance. 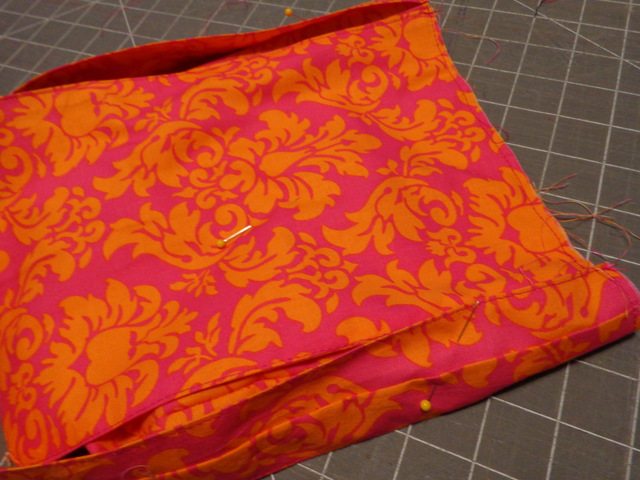 Pin the flap and each side of the straps out of the way like I did in the photo. 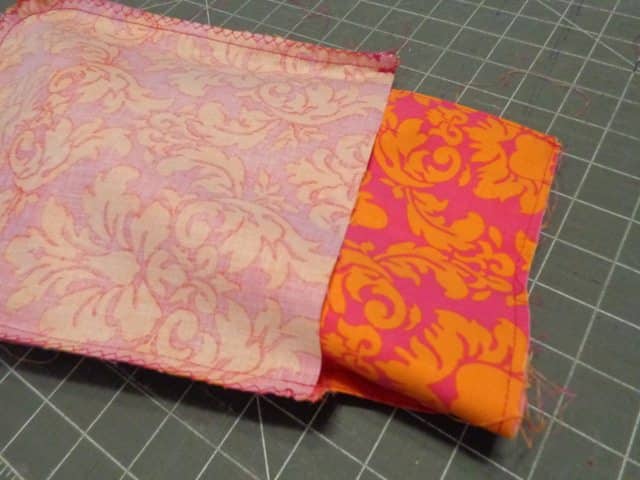 Now, put the bag inside the lining with right sides together. I know it looks a little funny but stay with me. 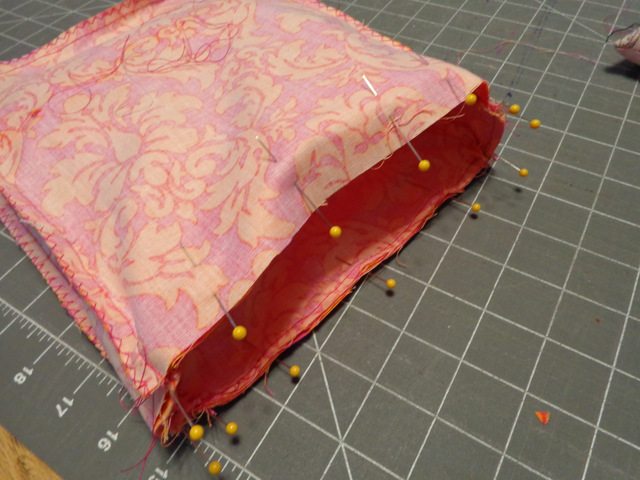 Match up your raw edges and side seams and pin all the way around. 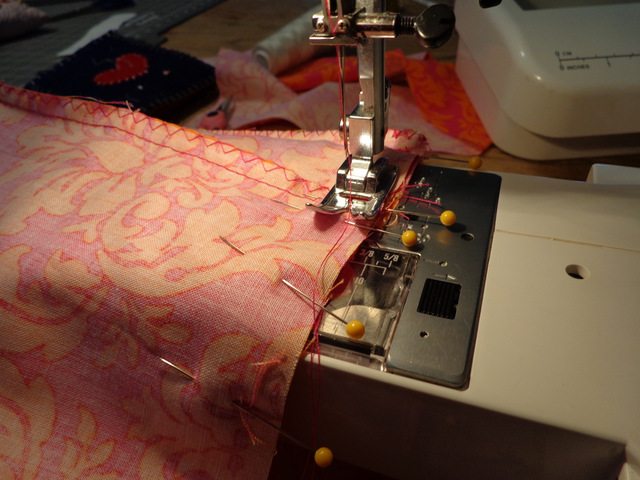 Stitch all the way around. I use a 1/4″ seam with my needle all the way to the left. You can do that or use a little bit bigger seam, like maybe a 3/8″. When you’re done, make sure to zig zag all around. 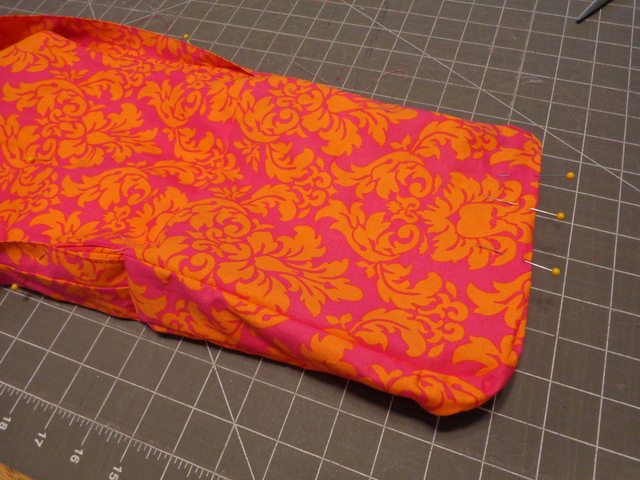 Now, pull the bag out of the hole in the lining. Once it’s all out, tuck in the raw edges of the hole and pin it shut as shown. Now stitch it closed just like you did when you topstitched. Unpin your flap and strap. 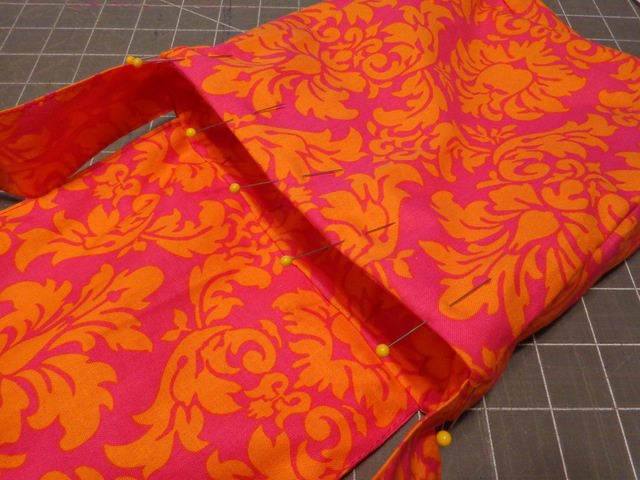 Stuff the lining into the bag. Now, you could be done right now, but I always do one last topstitch around the opening. 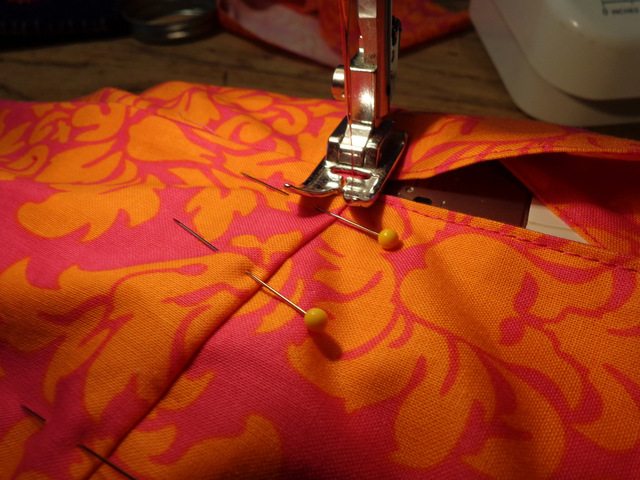 When you get to the strap and flap just make sure they are out of the way and continue stitching until you’ve completed the circle. 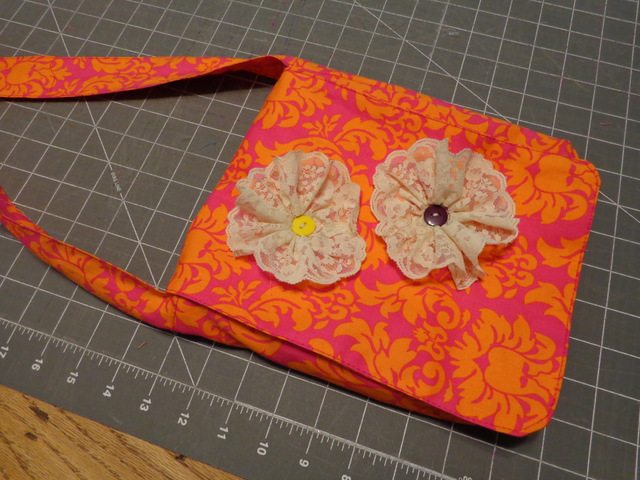 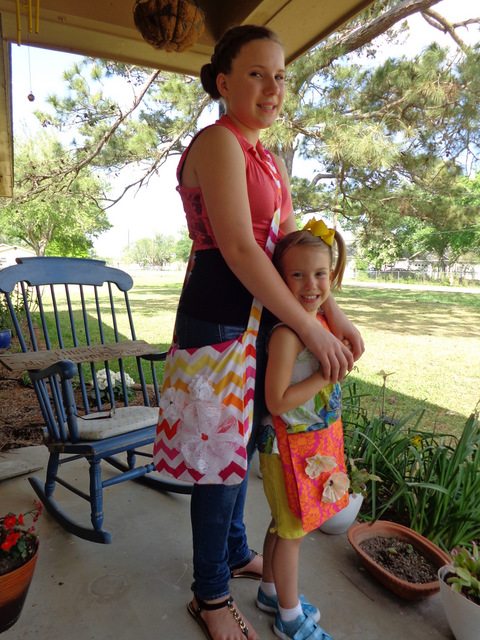 Here are the girls before we went to town. I love that they love their messenger bags. Phoebe’s second one is from the same fabric as Esther’s bag. 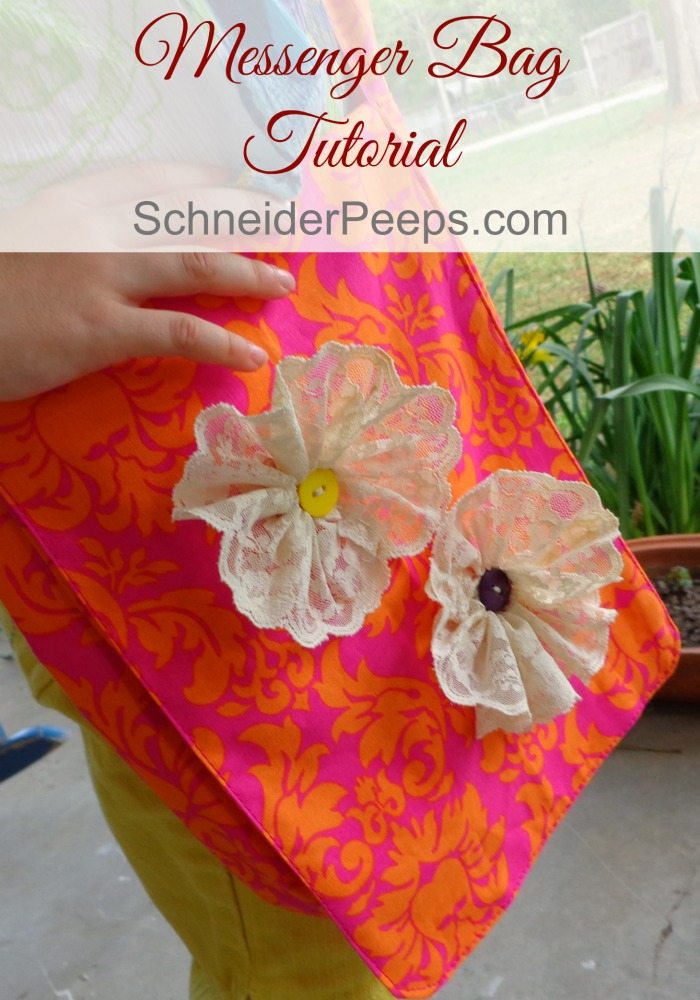 Let me know if you have any questions. Also, if you make one, send me photo, I’d love to see it.

Really sweet!( girls and bags) . I am passing this on to sewing friends. Great idea for those of us who do not like purses. I am going to make an artist's bag for pen,pencils, sketch book , and pastels. Wonderful tutorital too, even for me who is a beginning sewer.--Cheers, Merri

Oh, The artist bag is a good idea! Email me a photo when you do it, I'd love to see it.

Christine @ Once Upon a Time in a Bed of Wildflowers

These are so cute! I love messenger bags -- especially to use as a "pocket" when I wear a skirt! :)

I love them, too! I find they are easier on my shoulder than a regualar purse.