I’ve mentioned several times how much I appreciate our homeschool drama club. We’ve just completed our 5th year with the club and I have to say that it’s one of the best extra curricular activities we’ve done.

It’s amazing to see the kid’s abilities develop from one year to the next. Most are pretty self conscious their first year but as the years progress they get more and more comfortable. It was fun seeing teens stand up in front of 350 people on Thursday night and 400 people on Friday night, perform and not be nervous.

Here’s couple of photos of Josiah and Phoebe. I had to crop the other performers out as I’m uncomfortable posting pictures of other people’s children without their permission. 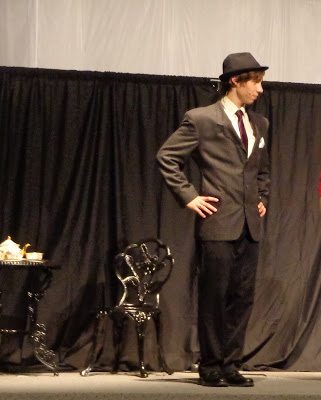 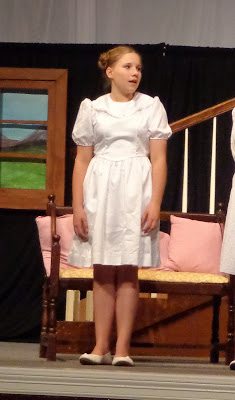 Phoebe as Gretl (who is supposed to be 5).
This play was overwhelming at times. This is the first time we’ve done a musical and it really adds another dimension to the performance. Also, this was an overwhelming play to do as far as costumes are concerned. Some of the characters changed 6 or 7 times.
But we live in an amazing community that really understands the benefits of the arts in their community. We had a lot of outside help. A couple of our local music ministers helped with voice coaching. Josiah was one of the recipients of this coaching and he is so much more confident in his singing than he ever was before. The local dance theatre loaned us their “Nutcracker” stairs. Two different high schools – one public, one private – loaned us costumes to help out. A local Catholic church loaned us a kneeler….
…I could go on and on. But I won’t.
All of this to say, if you have a local drama club (homeschool, private school, public school or community theatre) think about what you can do to help them out occasionally. They really do enrich the community.
Are you involved in a community theatre of some sort? If so, what are some of the plays you’ve done or seen that you enjoyed?

I love this. Our home school community used to have drama when my son was young. I still remember when he dressed as Abe Lincoln and recited The Gettysburg Address.

How fun! I am sure your kids worked hard to get to the evening of the show.

No, no drama for me...except the kind you find at home. Hah!