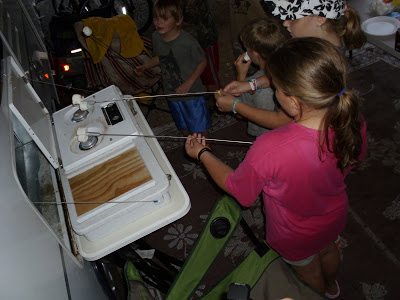 So what do you do when you go camping during the worst drought ever and
can’t have any kind of fire, not even charcoal? You improvise.

A few days before we go camping we sit down and decide what we want to each while we are gone. Once we only took instant oatmeal for breakfast, which was fine…until the neighbor started cooking bacon and eggs. But none of us want to be cooking and cleaning up the entire time, because it’s vacation. So we do a few easy meals, like sandwiches for lunch, and a few cooked meals.

Before we go camping, I make up a half batch of my pancake mix without the liquid ingredients and put it in a ziplock bag. So we have pancakes with bacon one morning . Camping is the only time I make bacon so it is a real treat. On another morning I’ll make eggs and bacon taquitos. The rest of the time we have instant oatmeal or bagels with cream cheese.

For our dinners, we usually use the dutch oven but not this year. Since we couldn’t take the dutch oven and Carl really wanted pot roast and gravy, I took my electric roaster oven. It worked great. We used it for pot roast with potatoes and carrots one night. For the gravy Carl took the drippings from the roast and added a can of cream of mushroom soup. It was really good. We also used the roaster oven to cook link sausage with potatoes one night. We had spaghetti one night. I cooked the spaghetti and browned the meat before we left home and froze them. Then I just boiled water and poured it over the spaghetti to heat it up. I heated the meat up in a pan with some canned sauce and it turned out pretty good.

Gabriel really wanted burgers one night and so before we left he spent time making the hamburger patties with his special secret recipe. I told him to only make one per person because I didn’t want to have leftovers. I’m not exactly sure how the miscommunication happened, but apparently Gabriel thought I meant to use the entire 5 pounds of meat to make the eight patties. The burgers where huge. Unfortunately, they got left in the freezer and we had to use store bought patties. But I’m sure they’ll taste just fine here at the house.

We also made some peanut butter treats to take with us, this time Christian made them and  rolled them in mini chocolate chips. yum

Here’s some ideas about cooking while camping:

Above all, have fun. Our camping motto is “That’s just how we like it!”

Melinda - I'm sure Gabriel would like Pedro, esp. if Pedro likes large quantities of food, too.

Christy - We miss you, too! We met some people from Ohio at Six Flags and it made us think of you.

The above post was from me, Christy. I keep forgetting to put my name!!!

Sounds like you guys are having a blast!!! Missing you guys.

Great ideas! Having 5 kids - I can understand how the miscommunicationcould have happened! :) My Pedro would like your Gabriel! He thinks bigger is definitely better when it comes to food.

We rarely have roast here, so it was a real treat! It was actually the easiest meal to cook.

We've been grinding our wheat for years so I'm not sure how much stone ground whole wheat costs. But I pay about 90 cents a pound for whole wheat berries. I buy them from Honeyville Farms, there's a link in my sidebar, and have them shipped to my house for $5 shipping. I have the K-Tec kitchen mill which I have had for about 10 years and I paid $150 for it at the time. The thing about grinding your own grain instead of buying it in the store is that the flour texture is much more like white flour. So I can use just whole wheat in my recipes instead of half wheat and half white. I also can use soft pastry wheat in things like pancakes and biscuits and then the hard white wheat in yeast breads. The hard white wheat has a milder flavor than the hard red wheat. My friend, Kara, with www.keepersathome.blogspot.com, has some great posts on different kinds of wheat also.