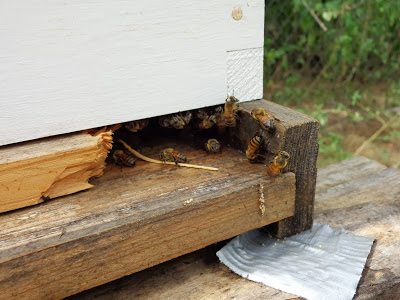 We lost one hive over the winter to carpenter ants and we made plans this spring to order packaged bees to replace it and replace a hive that is more aggressive than our other ones.
We waited and waited for the bees and a few days before we were expecting them, Gabriel got a call saying that the bees weren’t coming. The apiary had some issues with bees dying en route and they would not be able to fill our order. At that point, it was too late to get bees anywhere else – we tried. So we just did what we do best, use what we have.
We’ve had quite a bit of a drought this summer and we’ve had to actually feed the bees some. We’re only in our second year of beekeeping so we’re trying different things to figure out what works best for our bees. One hive has eaten all of the honey in a super that we thought we’d get to harvest.
At some point this summer, Gabriel lost the hive that was living in the top bar hive. We’re not sure what happened but believe it was the carpenter ants.
It’s hard to express the emotions that go along with all this. After all, they’re just bees. But there’s so much time and effort (and money) that goes into this part of our homestead by Gabriel. And, of course, we feel a deep sense of responsibility to care for any animal we bring on our property – including the bees.
Gabriel and Carl have gotten into the bee removal business and have had quite the experiences. It’s been really fun. Sometimes the bees are too aggressive and need to be destroyed. But sometimes, they aren’t and a couple have been relocated to our yard. 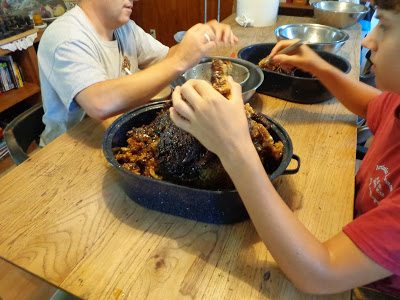 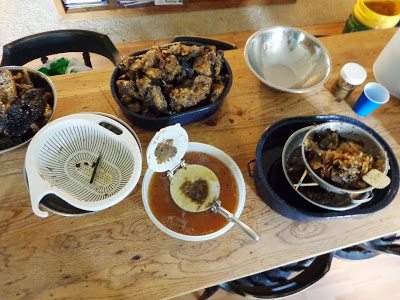 This is what happens after a bee removal. Gabriel and Carl get busy processing the honey and wax. They double check the comb and make sure there’s no brood in the cells.

They’ve been using a tortilla press to press out the honey. We’re exploring other ideas as we’ve already broken one tortilla press.

While I love the few days after a removal, having all my colanders, most of my large bowls, along with my large spoons and spatulas being used makes cooking a bit of a challenge.

When it’s all said and done, the brood comb will go out near the bee yard for the bees to clean. After they’ve had whatever they want we dump the old brood out for the chickens. Then Gabriel melts the wax down and cleans it. He also sells the honey to friends locally.

Beekeeping is definitely a learning experience and even though we’ve had some heartache, we’ve learned so much. And we get really great honey.

How are the bees doing in your area?

I had bazillions of happy bees in my yard all summer on the Rose of Sharon bushes and various flowers. I only wish that I COULD keep a hive or something to help them all out!

I wonder if Rose of Sharon would do well here. Also, you having all those beautiful flowers are just what the bees in your area need. You're helping out alot.

Interesting to rea your experience with bees, we kept bees for years in the mountains of Vermont and it was quite challenge! Thank you so much for sharing on the HomeAcre Hop! Hope to see you again tomorrow! Nancy The Home Acre Hop

Thanks for hosting each week, Nancy. Bees are a challenge, but they're so much fun.

This is quite fascinating - I have some friends who raise bees for honey - they meet monthly - I am sure they could empathize - would LOVE to do this, maybe some day - so glad you were able to get some honey and wax - I LOVE beeswax!I am delighted that you shared with Home and Garden Thursday,Kathy

Bees are so facinating. This is one area of our homestead that I really don't contribute much too. My son, Gabriel, is the official beekeeper. I love beeswax, too. I've found several fun uses for it.

Our bees did not survive last winter and the new queen did not do a good job. So no honey here :(.

Anna, I'm so sorry. I'm not sure we'll get much from our hives this year. But Carl and Gabriel have had quite few bee removals so we'll have honey for the year. I'm hoping your's do better next year.

Glad I found this post. We are going to beekeeping school in October for bees in the upcoming season. I am looking forward to it, but know from my reading it is challenging right now to keep bees alive and healthy. We are hoping for good things of course. We joined an association about an hour from us. We are new members so have not attended yet. I think it will be alot of help to have folks near us though that do this too. Good luck and keep on posting about your status!

I think it will be a lot of help also. My son does have a beekeeping friend that he can call for advice but that's about it. It would be nice to have a beekeeping school. We're just kind of taking it one step at a time and doing the best we can. We're working really hard on getting more bee friendly flowers planted on our property. We'll be sowing some wildflowers in November so hopefully next spring and summer we'll have lots of flowers. I can't wait to hear about your bee adventures.